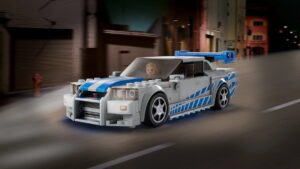 Hate it or love it but the Fast & Furious movie franchise has had a huge impact on both pop and automotive culture. It even made its way into the LEGO universe as the company is preparing to release the iconic Nissan Skyline GT-R R34 from the 2003’s 2 Fast 2 Furious very soon.

Even though 2 Fast 2 Furious was panned by critics and many audiences alike but if you love cars, then it is hard to forget the R34 although its role as the hero’s car was taken over by Mitsubishi Lancer Evolution VII in the latter part of the movie. In case you have never seen it before, here is a preview:

If you are a purist, then you might be irritated to see that none of the aftermarket brands that were on the car’s hood and bumpers made their way to the LEGO replica. Then again, this is a Lego Speed Champions release after all which is meant for kids aged above 8 years old and accuracy is not exactly the main objective.

Nevertheless, LEGO has fairly recreated the car’s paint job and blue stripes for the replica as well as making it a right-hand drive vehicle just like in the movie. Furthermore, the company has included a Brian O’Conner (played by the late Paul Walker) minifigure with it.

Expected to be available worldwide this coming January, the new 2 Fast 2 Furious’s R34 LEGO Speed Champions replica has already appeared on LEGO Malaysia’s website. However, its actual availability date and pricing in our market are not yet known at the moment though.

For those who are wondering, this is not the first vehicle F&F features by LEGO though. Earlier this year, the company unveiled the 1970 Dodge Charger R/T from the original Fast & Furious movie which comes complete with a minifigure iteration of its driver, Dominic Toretto that was played by Vin Diesel.

In case you want to get your hands on it right now in anticipation of the Nissan Skyline GT-R R34 release, the LEGO Speed Champion replica of Dom’s Charger can be obtained for RM119.90 from LEGO Certifies Stores all over the country including Brick Magic and Box Of Bricks.