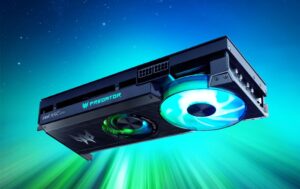 Acer recently made history and achieved a new milestone for itself, when it threw its lot into the graphics card market with its own vision of the Intel ARC A770. As for its name, the Taiwanese brand has chosen Bifrost, the name of the rainbow bridge in Norse mythology and, unsurprisingly, it will be released as part of its Predator gaming sub-brand.

Based on its official launch image, the Bifrost A770 is cooled via an asymmetrical dual-fan configuration. By that, one of the fans is bigger than the other. Oddly enough, the secondary fan looks more akin to the kind of fans that you find on those old blower-style graphics card designs; it sort of indicates that Acer may have done this on purpose as a way of providing a form of exhaust out the rear of the card.

Introducing the all new @intelgraphics #IntelArc A770 GPU, which we’ve christened #PredatorBiFrost. Paving the way for a new generation of gaming awesome! pic.twitter.com/MmN4rAszIt

The big fan on the Bifrost A770, on the other hand, seems to be dedicated to “aggressively” cooling down the heatsink underneath it, albeit through the tail end of the card. And yes, the entire card will ship out, fitted with RGB and judging from the render, the large fan may be made from a semi-transparent material, given how bright it seems to be.

As for its physical aspect, it’s hard to tell from the one image but the Bifrost A770 doesn’t look like it will be a massive card. If we were to make an educated guess, this could be a 2-slot fan at its smallest and 2.5-slot at its biggest. Moving on, we can also see that the card requires two 8-pin PCIe connectors in order to run. Like all custom-cooled graphics card, it is also likely that the card’s boost clocks may be tweaked to run slightly higher than Intel’s set reference speed for the card, right out of the box.

Beyond the picture, there’s not much else known about the Bifrost A770. As for the base specs, we already know that the A770 runs on Intel’s fully-loaded ACM-G10 GPU, comes with 32 Xe-Cores and an equal number of ray-tracing cores, 512 XMX Engines, and a 2100MHz graphics clock. The one detail that isn’t clear here is whether this card is equipped with 8GB or 16GB GDDR6 graphics memory. That being said, Intel had said that the 8GB variant will only be available via board partners, so we should also be seeing a 16GB version of the card from the brand as well.

The post Acer Makes Its Graphics Card Debut With Bifrost A770 appeared first on Lowyat.NET.