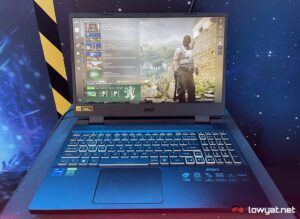 Back at CES earlier this year, Acer has revealed the 2022 iteration of Nitro 5 which has been given a redesigned chassis alongside a new hardware option in the form of the latest CPU and GPU in the market. Six months later, the new Nitro 5 has finally made its way to Malaysia.

Making its Malaysian debut at the Predator Roadshow in Sunway Pyramid today, the new Nitro 5 can be obtained in several specifications. The base model is powered by the Intel Core i5-12500H and NVIDIA GeForce RTX 3050 Ti graphics alongside 8GB of RAM, 512GB SSD and a price tag of RM4,399.

Here is the specifications list for the rest of Nitro 5’s variants that are currently being offered in Malaysia:

While all variants of the 2022 Nitro 5 come with a 15.6-inch IPS display, only the highest-end unit receives the 165Hz QHD IPS panel. The rest have been equipped with the 144Hz Full HD IPS panel instead.

Similar to its predecessor, the 2022 model still features an additional 2.5-inch SATA slot that allows users to add in secondary storage drive themselves. The redesigned Nitro 5 is also equipped with a dual-fan cooling system that works together with the new chassis’ dual air intakes and quad exhaust ports.

Unlike its higher-end Predator siblings, Nitro 5 does not come with individual RGB backlit keys but the keyboard still features four RGB areas and a dedicated key to launch the NitroSense control centre. For audio, the gaming laptop offers a pair of 2W speakers that have been enhanced by DTS:X Ultra.

With a thickness of 25.9mm and weighing 2.5kg, the Nitro 5 also has an HDMI 2.1 port, Thunderbolt 4 USB Type-C port, USB 3.2 Gen 1 Type-A port and two USB 3.2 Gen 2 Type-A ports. Network-wise, the RJ45 port and Intel Killer E2600 controller on the laptop provide Gigabit Ethernet connectivity for it while its Bluetooth 5.2 and Wi-Fi 6 connections are powered by the Killer Wi-Fi 6 AX1650i module.

Gamers out there who want to get their hands on the 2022 Nitro 5 can do so immediately at Acer Malaysia’s eStore as well as Acer’s official stores on Shopee and Lazada. However, there is a discount of RM150 alongside free Touch N Go eWallet credits, Netflix gift card, Steam Wallet credit, and peripherals if they choose to obtain it at the ongoing Acer Malaysia’s It Lies Within Roadshow in Sunway Pyramid which will last until this Sunday, 3 July.