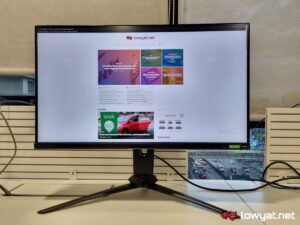 Acer’s top-tier Predator X28 is a gaming monitor that seemingly ticks all the boxes for high-end gaming monitors. It has a maximum resolution of 4K, HDR, high refresh rate, fast response time, and compared to the Predator X27, a lot of love for user’s eyes has been poured into this monitor.

So, without further ado, let’s dive in and see what Acer’s latest premium gaming monitor is all about.

As stated at the beginning of this review, the Predator X28 is a 28-inch 4K gaming monitor with an IPS display. Also, as an NVIDIA G-SYNC monitor, it’s a monitor designed to be paired with NVIDIA’s GeForce RTX series graphics cards. Additionally, display has a variable refresh rate of 144Hz, which is more than plenty for me, but can be overclocked to run at 152Hz via the monitor’s menu.

What really makes the Predator X28 unique, though, is that technically, it is the company’s first 4K HDR gaming monitor to ship out with NVIDIA’s Reflex Analyser. Paired with the maximum 152Hz refresh rate through just a couple of clicks, and the monitor will adjust its response time all the way down to 0.2ms.

From a design standpoint, the X28 is comparably better looking than its predecessor; Acer’s Zeroframe design means that the monitor is basically bezel-less, save for the thick base at the bottom of the display that houses the proximity sensor that supposedly detects your presence, powering down whenever there is no one in the room.

Moving on, the Predator X28 carries on the tradition of being an exceptionally ergonomic and flexible monitor, with the ability to tilt, swivel, adjust the viewing height, and to my surprise, pivot into portrait mode, should that tickle your fancy. Oh, and it’s even VESA mount-capable.

From a performance standpoint, the Predator X28, again, checks many things off the list. At 4K, the viewing experience is nothing short of immersive and stunning. The visuals, both in still images and video, simply just pop, and that’s also thanks to the 90% DCI-P3 colour accuracy of the panel. On top of that, words and sentences look sharp and are very readable.

Because it’s an HDR monitor too, blacks look really deep and whites feel blinding at times, the latter contrast being dependent on just how high you’ve set the HDR brightness levels at. As far as gaming goes, the experience is a fairly similar story: with G-SYNC on and the high refresh rate, all the titles that I’ve played look smooth and jaw-droppingly gorgeous.

Ghosting is still present and isn’t entirely eliminated, but the phenomenon only occurred a handful of times during the testing period, so I can comfortably say that it did absolutely nothing to hinder my gaming sessions. On that note, I am also happy to report that the monitor does not appear to suffer from any edge bleeding or blooming effects.

Another plus point about the monitor? Compared to the high-end gaming monitors like the Predator X27 and ASUS’ PG27UQ, the cost of the Predator X28 is about a third of those two monitors, at RM3699.

In all honesty, I think the Predator X28 is a monitor with a little bit of an identity crisis. On the one hand, Acer clearly wants gamers with a lot of disposable income to purchase it, and pair it with their high-end gaming monitor. On the other hand, the inclusion of NVIDIA’s Reflex Analyser, although welcome, feels more like a point of redundancy; it’s a feature that I think should remain limited to those ultra-high refresh rate, Full HD gaming monitors, primarily aimed at Esport players and competitive gamers.

Another small caveat of the Predator X28 is the accessibility of its USB 3.0 ports. With its predecessor, two of the ports and the hub were simply installed in the back. With this monitor, Acer has gone with the standard industry practice and relegated them to the undercarriage, but the other two are still located on the side.

At the risk of repeating myself, I will say this: At RM3699, the Acer Predator X28 is definitely a damn sight more affordable than what the company offered to the high-end gaming monitor market three years ago. At a glance, it is a streamlined version of the brand’s former king-of-the-hill 4K gaming monitor, made more “affordable” for a market where such components are already the norm, replacing the once-coveted Full HD resolution.

However, while NVIDIA’s G-SYNC is already a standard addition to such gaming monitors, my only concern is the Reflex Analyser feature that is built into directly into the monitor. Once again, I think it’s a unique and useful tool to help gamers that want to improve their aiming and trigger response, but as I mentioned in the previous section, it’s a feature that feels misplaced, especially since I believe that the focus of anybody who purchases the Predator X28 will be towards the pretty colours and pictures from AAA titles. And not how fast they’re able take down their opponent in Fortnite or Valorant.