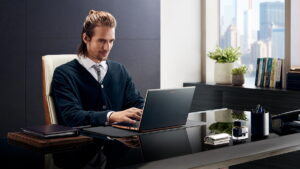 Riding on the wave of Intel’s recent 12th gen mobile processors announcement, Taiwanese tech company Acer has unveiled two next-generation Swift laptops which will be powered by the newly introduced chips. The new devices consist of the 2022 iterations of the premium Swift 5 model, and the highly portable Swift 3 notebook.

First, we have the new Acer Swift 5, which features a touchscreen display with WQXGA (2560 x 1600) resolution, 16:10 aspect ratio, and Corning Gorilla Glass protection. It also comes with a premium two-tone aluminium body, as well as an internal cooling system consisting of twin fans and D6 heat pipes for increased airflow and thermal efficiency.

Under the hood of the Intel Evo verified laptop is a 12th Gen Intel Core processor of up to 12 cores with Intel Iris Xe graphics, as well as 16GB of LPDDR5 RAM and up to 2TB of PCIe Gen 4 SSD storage. Acer claims that the Swift 5 is capable of lasting up to 10 hours of battery life, and comes with fast charging support that yields over four hours of usage with just 30-minutes of top-up. Also onboard are two Thunderbolt 4 ports, two USB 3.2 Gen 1 ports, and a HDMI 2.1.

Next up is the Swift 3, which features a smaller 14-inch with either a 16:9 QHD display or a FHD touch display. It also comes with Acer’s dual-fan cooling system, as well as a mix of USB-C, USB-A, and HDMI 2.1 ports.

Powering the laptop is up to the latest 12th Gen Intel Core processors, along with up to 2TB of SSD space. Battery-wise, Swift 3 also comes with fast-charging capability which the company claims is able to top-up four hours of usage after 30-minutes of top-up.

The new Acer Swift 5 laptop is slated to ship earliest in March for certain regions at a retail price of US$ 1,499 (~RM 6,297), while the Swift 3 will ship earliest by April at US$ 850 (~RM 3,570). The company has yet to confirm the duo’s expected availability and pricing in Malaysia.