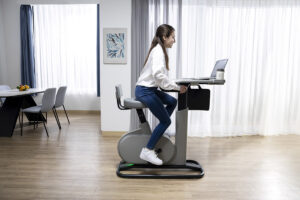 Acer has recently introduced a new desk known as eKinekt BD 3 during CES 2023, which features an interesting gimmick that’s useful for those who work remotely from home. Rather than featuring RGB lighting and motorised adjustable heights, the brand‘s latest product is basically a combination of a desk and an exercise bike. Oh, and did we mention that it can also convert your pedalling power into energy that can actually charge your devices?

Granted, bike desks have indeed become a thing thanks to the COVID-19 pandemic, but none of which come with the same kinetic-to-electric conversion capability as the eKinekt BD 3. According to Acer, one hour of constant cycling at 60 RPM on its own bike desk can generate 75 W of self-generated energy. Converted power is transferred to connected devices such as laptops and smartphones via two USB Type-A ports and one USB Type-C port. Sadly, there’s no Qi wireless charging capability, though the inclusion of one would’ve made things more interesting.

The desk itself is said to provide ample working space, and can be adjusted into two positions. Working Mode has the desk surface closer to the chair, while Sports Mode situates it further away so you can lean in for added leg space and increased pedalling power. Additionally, the Acer eKinekt BD 3 has a bag hook on the side and a designated beverage holder, as well as an LED charging indicator on its back that lights up when you pedal – signalling that kinetic energy is being converted.

Besides that, it features an LCD display and a companion smartphone app that provides the user with real-time information about their progress. The latter of which displays details such as ride duration, distance, and watts generated when pedalling. The app can also be personalised, allowing riders to input information such as their height, weight, gender and age for more accurate tracking.

Acer says the eKinekt BD 3 will be available in Taiwan this April for NTD 29,000 (~RM 4,161), while both US and Europe would only receive it around June 2023. Unfortunately, there’s no word on whether the new bike desk would be making its way to Malaysia just yet.