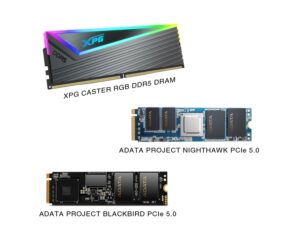 CES 2022, like any tech exhibition, is expected to give consumers a first glimpse of the latest technological innovations and products. Case in point, Adata, the memory brand and manufacturer, recently announced that it would be showing off its next-generation PCIe NVMe 5.0 SSDs during the event.

The brand is expected to debut two PCIe 5.0 SSDs, dubbed “Project Nighthawk” and “Project Blackbird”. Both storage drives are expected to deliver up to twice the average sequential read and write speeds of current top-tier PCIe 4.0 drives.

For example, the Project Nighthawk SSD will be fitted with a Silicon Motion SM2508 controller and will achieve read and write speeds of 14GB/s and 12GB/s, respectively. With the Project Blackbird SSD, the storage medium will have the same read speeds as Nighthawk, but a slower write speed of 10GB/s. Regardless of the model, Adata says that both SSD models will be available in capacities of up to 8TB.

There is one small problem, though: At current, only Intel’s 12th generation Alder Lake platform is capable of supporting PCIe 5.0, but the M.2 slots that are embedded in most of its 600 series motherboards only support up to PCIe 4.0, the exception here being ASRock’s Z690 Taichi that actually has two built-in PCIe 5.0 slots. At this rate, the only way consumers would be able to run these Adata’s SSDs is with the appropriate M.2 adapter.

In any case, we’ll just have to wait until CES 2022 kicks off next month to find out more.

The post Adata To Showcase PCIe 5.0 SSDs During CES 2022 appeared first on Lowyat.NET.