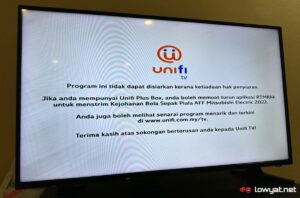 Previously available exclusively on Astro, Communications and Digital Minister Fahmi Fadzil last week announced that the public is able to watch the AFF Mitsubishi Electric Cup for free through RTM’s TV2 and Sukan RTM. If you planning to catch the event including tonight’s match between Malaysia and Singapore on TV2 via Unifi TV, prepare to be disappointed though.

This is because Unifi TV is not able to show the event due to the lack of broadcast rights. Unfortunately, this is nothing new due because it also happened during quite a number of major sporting events including the FIFA World Cup even though TV2 is part of the Unifi TV channel line-up.

However, all is not lost for Unifi TV viewers though. Similar to the recent FIFA World Cup Qatar 2022, they can still catch the event by installing the RTMKlik app into their Unifi Plus Box which is something that has been suggested by Unifi TV itself in its error message.

Also available for Android phones as well as iOS and Huawei AppGallery devices, RTM is broadcasting a total of 10 matches from the biennial regional event. That being said, the telecast will not take place at the kick-off time though.

Instead, all RTM broadcasts from the event will be delayed for 15 minutes due to the terms that were imposed on Free-To-Air broadcasters. For example, Malaysia vs Singapore match tonight will be shown at 8:45 PM instead of its actual kick-off time at 8:30 PM.

Speaking about the match which has also been referred to as the Causeway Derby, Harimau Malaya needs to overcome Singapore in order to qualify for the next stage of the event. Malaysia is currently third in Group B after having a good start to its 2022 AFF Mitsubishi Electric Cup campaign by beating Myanmar and Laos but encountered a big obstacle in its journey after losing out to Vietnam last week.

The post AFF Mitsubishi Electric Cup Broadcast On RTM Is Not Available Through Unifi TV appeared first on Lowyat.NET.