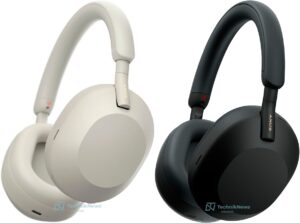 It’s been nearly two years since the launch of Sony’s WH-1000XM4 ANC headphones, so it’s safe to say that it’s about that time for the Japanese brand to announce the successor to those headphones. As it turns out, renders depicting the alleged 5th generation ANC over-ear headphones have supposedly been leaked, and, we must say, they are quite the looker.

The leaked renders WH-1000XM5 were first posted by the German lifestyle tech site, TechnikNews, and it appears that the headset comes in two colour tones: Black and off-White. More importantly, you’ll notice that the headphones also seem to sport a new sleek design, along with a thinner headband in comparison to the 1000XM4s.

Also as pointed out by The Verge, the joint that connects the earcups to the headband is now exposed, which also contributes to the overall slim outlook of the WH-1000XM5. Clearly, the earcups can still be swiveled, a point that seems to be proven through one render showing the headset laying inside its personal carrying case.

To be fair, Sony’s ANC over-ear headphones were due a facelift or revamp in its design; the 1000XM4 is practically a carbon copy of the 1000XM3 and of late, the only audio lineup that the brand has consistently updated or changed its design are its TWS earbuds. Case in point, the WF-1000XM3 and WF-1000XM4.

We can also see that the back of the WH-1000XM5’s earcups show off a more defined appearance, making it look more pronounced and allowing it to stand out, in contrast to the 1000XM4s. Also, assuming that Sony isn’t deviating too far from the design, it is likely that the back of the right earcup will be housing the touch-based control sensors.

Other alleged details suggest that the WH-1000XM5 will also provide 40 hours of battery life, up from 30 hours with the 1000XM4s, with ANC turned on. Further, fully charging the headset is a task that can be done in 3.5 hours via USB-C. Additionally, the headphones will also be fitted with a new driver and two new processors for ANC, though the details on those physical fittings are still vague.

Moving on, it appears that the power “button” on the WH-1000XM5 has now been replaced with a slider, while the “Custom” button has also been renamed to NC/Ambient. Oddly enough, none of the renders seem to give us a clear look as to whether the 3.5mm port is still present, or if Sony is choosing to do away with it.

At the time of writing, no official launch date or pricing for the WH-1000XM5 has been announced.

(Source: TechnikNews via The Verge)