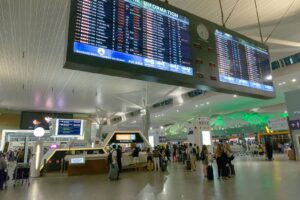 The Malaysian Aviation Commission (MAVCOM) has released its initial findings of its investigation into the complaints of flight delays during the recent Hari Raya period. The commission analysed data of flight schedule interruptions submitted by airlines and airport operators, totalling over 6,000 domestic flights from 29 April to 9 May, which is still a reduction from the 8,000 flights during Hari Raya in 2019.

In total, MAVCOM found that out of all the domestic flights during this period, 8% or 495 flights recorded delays that lasted over an hour. AirAsia, which flew a total of 2,954 flights, made up the bulk of these delays with 368 flights experiencing delays beyond an hour, just shy of 13% of its Hari Raya flights.

After being publicly accosted by KPDNHEP Minister Alexander Nanta Linggi in early May. AirAsia had agreed to refund passengers who were affected by the delays. The airline cited the lack of aircraft as the reason for the delays as it currently operates less than half of its pre-pandemic fleet, with several planes experiencing technical issues daily.

Malaysia Airlines had the second most delays with 44 delayed flights, just 3% of its 1,447 total. This was followed by its sister company MASwings with 64 of 656 flights delayed and then its subsidiary Firefly operated 680 flights with only 15 delayed. Batik Air, which was previously known as Malindo Air, had experienced delays on less than one percent of its 555 flights.

MAVCOM also revealed that 71% of flights that were delayed beyond two hours were due to operational issues such as lack of aircraft, while 25% were caused by technical issues. It also will be investigating further on whether the 160 flights that were delayed over two hours gave the necessary care to affected passenger as stipulated under the Malaysian Aviation Consumer Protection Code (MACPC).

For your information, the MACPC automatically affords passengers meals, telephone calls, and internet access for delays of 2 hours or more, which are required to be provided by your airline. If the delay extends beyond five hours, you are also entitled to hotel accommodation and transport.

The post Almost 500 Flights Delayed Over An Hour During Hari Raya Period appeared first on Lowyat.NET.