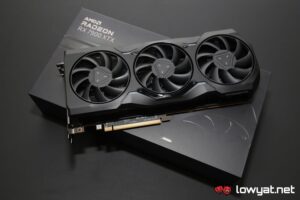 A little more than a month after AMD announced its Radeon RX 7900 series graphics cards, the 7900 XTX officially made its way into our labs; honestly, it is a real piece of work. I don’t say that last part lightly, primarily because, as you’ll read further along this review, the Red Team’s engineers at the Radeon division that poured their blood, sweat, and tears into making this their most potent GPU ever, can breathe easy knowing that their hard work is finally bearing fruit.

AMD has clearly and openly said that the 7900 XTX is designed to knock heads with NVIDIA’s 2nd most powerful GPU, the GeForce RTX 4080. So then, let’s get on with it and put that claim to the test.

Someone once said to me after seeing the AMD’s 7900 XTX with the reference cooler that someone within the Radeon division’s design team clearly had a penchant for the Dodge Charger, and that in turn served as the template for the card’s cooler shroud. I am somewhat inclined to agree; it looks blindingly industrial, with a ruggedness that absolutely makes NVIDIA’s GeForce RTX 30 and 40 Series Founders Edition GPUs look pristine and refined, by comparison.

Even the backplate of the 7900 XTX exudes its own character, eked out by the carefully indented sections on it, along with the red highlights and “Radeon” branding that you find at the bottom of it. Around the front, you’re greeted with a triple-fan cooling system and LED strips that are technically RGB-capable but throughout my review, I was unable to get it to change colour beyond its default white. AMD says that it will enable the RGB function at a later date and it will be made available through a software update. For that matter, these LED strips sit on top and below the middle fan, while the Radeon logo no longer lights up because it is now just painted out.

The 7900 XTX also stands out with regard to its size. Unlike its Ada Lovelace counterpart, AMD made an executive decision to keep the card more or less the same size as its Radeon RX 6000 Series cards, instead of upsizing the cooler shroud and heatsink. Of course, one reason and explanation behind this decision is that the chipmaker had said that this time around, it had shifted its priority towards power efficiency and milking GDDR6 for all its worth. In this case, all 24GB worth of it.

All that focus on power efficiency and performance-per-watt also means that AMD didn’t have to give the 7900 XTX a new power source or adapter. All you need to power the card is the same dual 8-pin PCIe power connectors, but that said, you are going to need a PSU with an output of 800W, minimum, in order to run this card.

RDNA3 is a game changer.

Speaking GDDR6 and as rugged as the exterior of the 7900 XTX is, one cannot discount what lies underneath the heatsink. The new RDNA3 GPU architecture within the card is an all-new approach for AMD; it uses a new chiplet GPU, a technology it first used on its Ryzen and EPYC CPU, the former being the Ryzen 7 5800X3D. The main GPU plays house to a brand new Radiance Display Engine, and is flanked by six 6nm Memory Cache Die (MCD).

All this combined with AMD’s 2nd generation Infinity Cache – 96MB of it for the 7900 XTX – means that this card is capable of 61 TFLOPs of performance and has a maximum interconnect speed of 5.3TB/s.

Ports-wise, the 7900 XTX has one HDMI 2.1a port, two DisplayPort 2.1 with Ultra High Bit Rate (UHBR) of 13.5Gbps, meaning that this card is able to support 8K resolutions at refresh rates as high as 165Hz, or 4K at 480Hz. Additionally, there is also a USB-C port that can also be used as a DisplayPort 2.1 port, as well as support for AV1 encoding and decoding.

The testbench for the 7900 XTX remains the same as before. That means I am using the Ryzen 9 7950X, 32GB DDR5-6000 RAM, and the same ASUS ROG Crosshair X670E Hero motherboard. Because the testbench is also AMD-based, it means I am able to take advantage of the chipmaker’s Smart Access Memory (SAM) technology.

One thing to note is that my CPU cooler isn’t what is listed, and this is yet again a shortsighted mistake on my part. At the time of testing, I had already swapped out the GamerStorm AIO cooler with the ASUS ROG Ryujin II 360, as it has a larger radiator and actually provides better cooling for the CPU. For another matter, I will simply be testing the 7900 XTX out of the box, meaning that no overclocking of the card will be done. And yes, for comparison sake, I will be benching the card against my RTX 4080 FE.

But for all the physical flaws of the 7900 XTX that I listed out, AMD certainly fulfilled its promise about its capabilities in the realm of gaming and how it is a tour de force against the RTX 4080, albeit being somewhat inconsistent in its approach. On the synthetic benchmark, the card is actually able to match, match, its rival’s performance and in the majority of scenarios, overtake it. In 3DMark tests Port Royal and Speed Way, the card is practically a hair’s breadth away from the RTX 4080’s performance, even if it is just playing “catch up” with it. It is that close.

In the real-world benchmarks segment of the 7900 XTX where we play our usual list of games, you can see the same cops and robbers performance continue with the RTX 4080. In titles such as Borderlands 3 and Doom Eternal, the RDNA3-powered GPU actually takes the lead.

Surprisingly, it doesn’t seem to be able to hold its in an AMD-centric title such as Deus Ex Mankind Divided but that being said, the game is getting on in age. Then there’s the ray-tracing-capable titles, such as Cyberpunk 2077. I will say this, AMD’s FidelityFX Super Resolution (FSR) technology has certainly come a long way; its performance mode in FSR 2.1 certainly feels and looks better than the grainy post-processing effects of the FSR 1.0. However, there is still some jello-like effect on-screen where the images appear very wobbly if that makes any sense. I say this because I’m only experiencing this with the 7900 XTX.

The only drawback to ray-tracing right now though is that not all games are compatible or support FSR and using Radeon Super Resolution (RSR) has its limits. For that matter, sometimes RSR is the only alternative to DLSS that I have in some titles, such as Watch Dogs.

It is not all sunshine, lollipops, and rainbows for the 7900 XTX, though. My review suffered from an issue that I encountered when I reviewed the 6900 XT years ago: the power needed to run it, or rather, the PCIe cable configuration. You see, I normally power a GPU through a single PCIe cable that splits into two heads on one end, and I have done that for many years. However, with this card, that isn’t possible because everytime I loaded up a game, the card would experience a surge of power (characterised by the fans rapidly ramping up in speed) and then snapping off instantly! Worst, it put my entire system in a frozen state, with no other way to reboot than, to quote the IT Crowd’s Roy, to turn it off and on again.

The workaround then is for me to use two separate PCIe power cables on the 7900 XTX, and that eliminates the problem. Yes, I can hear some of you saying that this is good practice and this should be the way, but my counter-argument is simply this: it’s 2022, AMD. By right, this really shouldn’t be an issue, especially for a card that you have taken great pains to have a significantly better performance-per-watt ratio than your green rival’s cards. Sure, you can make jokes about its 16-pin 12VHPWR adapter being a fire hazard, but that is still innovation in design and at the very least, the company is still moving forward with providing an alternative in power delivery and it is a certainty that it will resolve its issue in time.

And while getting the 7900 XTX to run is one thing, it’s a whole other issue trying to get it to run with some other titles. One such title that isn’t on the list, primarily because it’s still relatively buggy, but I have been playing is Warhammer 40K’s Darktide. Every time I start up the game with this RDNA3 GPU, I am greeted with a black screen in the foreground; I can still hear background activity once I enter the game’s “lobby”, but nothing can be seen. At this stage, I’m simply chalking it up to press drivers AMD provided me, as it seems that they were made before the title’s official launch.

As far as the operating temperatures of the 7900 XTX go, the card never appeared to go beyond 72°C and seems to peak right at the number. Having said that and as I’ve mentioned in past GPU reviews, I tend to keep a very chilly lab, with the ambient temperature hovering between 19°C and 20°C, and on top of that, I use an open testbed.

One oddity that I’ve noticed is that when I start up the system, the 7900 XTX’s zero RPM function does seem to function. However, after running a couple of games and benchmarks, I noticed that the fans, after naturally ramping up to cool the card, never actually stop spinning, even after the card’s idle temperature goes below the 39°C floor. I don’t know if this is a flaw in its design, but I do hope that this is an issue that AMD can fix.

In terms of power consumption, the 7900 XTX appears to draw as much power as advertised when running at full speed. As such, nothing to report on this end.

It is hard to think that in just one generation, AMD has managed to close the gap in its GPUs’ performance and NVIDIA’s to what is essentially a very narrow margin. the performance of the Radeon RX 7900 XTX is, for lack of a better word right now, stunning, and not just in raw performance. I didn’t think it was possible, but this card and the RTX 4080 have actually pounded each other, figuratively speaking, into a stalemate.

The AMD Radeon RX 7900 XTX is a bonafide 4K gaming monster that NVIDIA should be concerned with.

One possible drawback I can see the 7900 XTX losing out is on the current state of AMD’s FidelityFX Super Resolution (FSR) AI upscaling technology not being up to par with NVIDIA’s own DLSS 2.0 Super Resolution or DLSS 3. But it is flanked by Radeon Super Resolution (RSR), which is applicable to the majority of titles but doesn’t work when you run a title at your display’s native resolution. But again, Team Red’s FSR 2 has come a long way since the technology’s inception and frankly speaking, its implementation boils down to game developers that are willing to bake the upscaling technology in their existing titles.

And if that wasn’t enough, the 7900 XTX’s US$999 (~RM4403) starting price tag is clearly going to be a deal-breaker for gamers deciding between this and the RTX 4080, especially since it is, at current, the card that offers the best price-to-performance ratio in its class. The ball then is now in NVIDIA’s court and from where I am sitting, the company has two options: lower the SRP of the RTX 4080 or launch the upcoming RTX 4070 Ti to gamers at an aggressively competitive price tag.