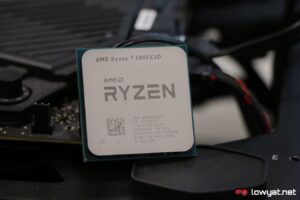 Nearly a year after the announcement of AMD’s 3D V-Cache chiplet design, we can finally talk in-depth about the technology and the processor that is set to serve as its cradle, the Ryzen 7 5800X3D. With the implementation of improved integrated memory technology and claims of better single-core and overall gaming performance than its non-3D counterpart and – perhaps rather boldly – Intel’s own Core i9-12900K, there’s nothing else to do except for one thing.

Take this CPU for a spin.

We’ve talked about AMD’s Zen3 CPU architecture for the better part of two years at this point, there technically isn’t a lot of new ground to break on its lithography, except for that one obvious addition, the 3D V-Cache chiplet design. At the end of the day and to reiterate, the 5800X3D is basically AMD’s final song and farewell number for the Zen3 architecture. So, if nothing else, it’s actually a fair way to send off the architecture and open the way forward for the Zen4 architecture that is expected to make its debut later this year.

As for what is different in the 5800X3D, you’re still got the same 8-cores, 16-threads as the 5800X, but thanks to the new 3D V-Cache design, it has three times the amount of L3 Cache, literally. I’m talking about 96MB of L3 Cache and this is achieved by stacking the additional cache vertically, instead of laterally. If that design methodology sounds familiar, it’s probably because AMD’s took a cue out of its own book, when it beat the competition to the punch with its first High Bandwidth Memory (HBM) design years ago. Where the chipmaker stacked the chiplets for it on top of it each, so as to cut down on the response time between each die and its capacitors.

But tripling the L3 Cache for improved performance comes with a couple of trade-offs. As you’ll see in the specs sheet above, the base and boost clocks are slightly slower than the 5800X, while the CPU voltage has also been lowered from 1.35V to 1.3V. Further, none of the cores can be overclocked; because of the limitations of today’s manufacturing technology, AMD has no choice but to implement a hard lock onto the processor.

The good news is that this is a one-off implementation and that this won’t be the case with future Ryzen CPUs.

The testbench I am using to test out the CPU is the same X570 setup that I have used since 2019, with the only changes being mainly cosmetic. On another note, the 5800X3D will be the first CPU in my list that will be tested using Windows 11.

While it is not listed here, the GPU I am using to run my test is an NVIDIA GeForce RTX 3090 FE. Also, I updated the motherboard’s BIOS to the latest AGESA, as per AMD’s recommendation to prevent any throttling or performance bottlenecks while testing the CPU.

In the synthetic benchmarks, it’s clear that the 5800X3D is neither playing catch up nor pulling ahead of the non-3D 5800X, and seems evenly balanced in the 3DMark tests. In the Cinebench R20 test, the processor’s performance is clearly affected by the caps on the CPU. However, AMD did warn us about these slight performance hits with synthetic benchmarks.

One of the titles AMD liked to show off during its brief presentation running their chops is Shadow of the Tomb Raider. As we can see in the charts, the 5800X3D clearly delivers and pulls ahead of Intel’s own top-of-the-line 12900K in that title, but also in a couple of others, including Control and Deus Ex: Mankind Divided. For that matter, the 5800X3D is also leaps and bounds ahead of the 5800X and quite surprisingly, it is the dominating processor when put up against AMD’s 5950X.

There is, of course, the subject of heat generation and power consumption to consider with the 5800X3D, and based on what I’ve seen, the results here aren’t quite as surprising as I had imagined. While it seems to draw more power than the 5800X while idling, its sustained power consumption when it is put to work is more or less the same as its non-3D counterpart. For that matter, it is the 12900K that is taking the lead here, consuming less power than the all three AMD on the list.

It’s a similar story with the 5800X3D’s overall temperature too. While it operates a few degrees higher than the rest of the crowd, it is still within acceptable parametres.

As I said near the beginning of this review, the AMD Ryzen 7 5800X3D is very clearly the company’s swan song, the last hurrah for all its high-performance endeavours with the Zen3 architecture, if you will. Regardless of its slightly muted performance compared to its 3D V-Cache-lacking siblings, it is still a capable workhorse when put to work, and more so when put to the task it was so clearly designed and made for: gaming.

And while it feels a little odd that the 5800XD’s cores cannot be overclocked, the final gaming results it can achieve with its vertically stacked L3 Cache more than makes up for the lack of the feature. So, if you’re not entirely bothered about not being able to push the cores of the 5800X3D to breakneck speeds and you’re looking for something slightly more affordable than the Ryzen 9 5900X, then consider this for your PC.