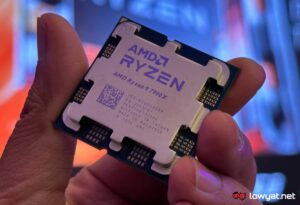 Four months after it was first announced at Computex 2022, the AMD Ryzen 7000 Series processors have finally reached retail stores all over the world today. That includes Malaysia and if you have been waiting for them, yes, all four new processors can be obtained in our market.

Just moments ago, AMD has officially revealed the pricing of the new Ryzen 7000 Series products for Malaysia. At the bottom of the list is the Ryzen 5 7600X which has six CPU cores and 12 processing threads that can run at up to 5.3GHz. Together with a 38MB cache and 105W TDP rating, this particular processor carries a price tag of RM1,399.

Next on the list is the Ryzen 7 7700X which comes with eight CPU cores and 16 threads configuration together with a 40MB cache and 105W TDP rating. Even though its base clock speed is slightly lower than 7600X at 5.4GHz, the 7700X can run as high as 5.4GHz and naturally, one has to fork out slightly more for the processor which costs RM1,899 in our market.

In general, you should be able to obtain these new Ryzen 7000 Series desktop chips from your favourite PC hardware retailers but AMD did provide us with a list of 32 local retailers [pdf] that officially carries them. So, you may want to reach out to them first before venturing to other options if you want to get your hands on any of these new desktop chips.

Meanwhile, don’t forget to check out our take on the series’ flagship model, the Ryzen 9 7950X right here if you are curious to know how it performed on our test bench. While you are at it, do also enjoy our quick unboxing of the 7950X and Ryzen 5 7600X above.