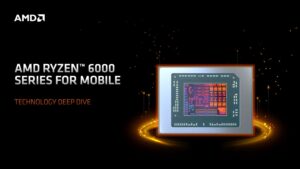 Back in January this year, AMD pulled back the veil on its Ryzen 6000 Series mobile lineup of laptop CPUs, while holding off on a specific launch date. As of this publication, we’re now able to share some details about a few of its inbound mobile processors.

As a quick recap, the Ryzen 6000 Series Mobile CPUs are based on the improved Zen3+ CPU architecture that are, in turn, built around the new 6nm process. Through the new 6nm process, AMD says it was able to design and build new mobile processors that are significantly more power-efficient than their Ryzen 5000 Series Mobile counterparts. Moreover, the majority of the new mobile CPUs also come paired with Radeon 600M graphics core, based on the RDNA2 architecture that was first introduced with the Radeon RX 6000 series graphics card lineup.

Of course, in keeping up with the trend of today’s modern laptop, the new chipset is also designed to support the latest technologies, including Wi-Fi 6E, Bluetooth 5.2 with LE Audio, PCIe Gen4, the latest DDR5 and LPDDR5 memory standard, and up to 240W USB-PD charging. On top of that, it also supports the USB4 standard that guarantees up to 40Gbps transfer speeds both ways.

Oh, and as mentioned in previous reports, the Ryzen 6000 Mobile Series will be the first x86 processor lineup to support Microsoft Pluton out of the box, along with Windows 11 security features.

Circling back to the power consumption of these CPUs, AMD and its engineers spoke at length about the power consumption, both for its U-Series and H-Series processors. Starting with the latest U-series mobile CPUs, the Ryzen 5 6600U and Ryzen 7 6800U, both CPUs are designed to run with an operating TDP between 15W and 28W.

At those TDP levels, AMD says that the 6800U and its 8-cores, 16-threads outpaces Intel’s 11th generation Core i7-1185G7 by nearly 30% in CPU compute performance, while graphics uplifts are nearly double. Of course, up the TDP to 35W and 45W, which are the TDP of the Ryzen 9 6980HS and Ryzen 9 6900HX, respectively. And the performance uplifts are equally as impressive For the 6900HX, specifically, AMD boasts an average performance uplift of up to 1.47X across the board, and that is against Intel’s 65W Core i9-11980HK mobile CPU.

Then there’s the integrated GPU for these mobile CPUs, the Radeon 600M series. While not full-fledge discrete laptop GPUs, AMD assured the press that these integrated graphics cores will still pack something of a wallop – within a quantified measure, of course – in thin and light notebooks that aren’t necessarily designed for gaming.

Since these graphics cores are skipped a generation and went straight to RDNA2, they are able to perform exceedingly better in some titles, versus NVIDIA’s GeForce MX450 discrete GPU. Not only that, but couple that with AMD’s FidelityFx Super Resolution (FSR) or Radeon Super Resolution (RSR), and you’ve got a framerate increase between 20 fps and 40 fps across the board.

As for when we can expect to see AMD’s new Ryzen 6000 Mobile Series: then, as now, notebooks powered by the chipmaker’s new CPUs are expected to make their appearance later this year, with brands such as ASUS, Lenovo, and Razer being the select few. That said, we’ll be looking forward to getting some review units to really see if the CPUs