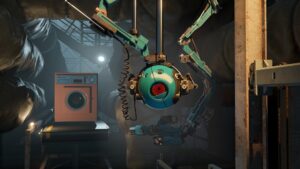 For the countries that are getting it officially, the Steam Deck has officially launched. Soon, Valve will be releasing a free game to act as a companion app to the portable gaming PC. It’s called Aperture Desk Job and it’s whole point it to teach users the way the machine works.

As you’d imagine, Aperture Desk Job is designed specifically for the Steam Deck. As per the game’s official description, it “walks you through the handheld’s controls and features, while not being nearly as boring as that sounds”.

You can play Aperture Desk Job on PC, but you’ll need a controller to do that. Which makes sense, if it’s made to work specifically with the Steam Deck. It even says that KBM usage is not supported.

Fans of the Portal series of games will undoubtedly see a lot of similarities here. Indeed, Valve says that this free tutorial game takes place in the same universe. But the company also makes it very clear that this is not Portal 3. Nor is there any indication that such a game is in development.

Being free, you can check out Aperture Desk Job at no cost, just to see what it’s all about. Though even if you have a controller, you should probably expect some things to not work properly. Unless, of course, you found a way to get yourself a Steam Deck. The free game is expected to release on 2 March.