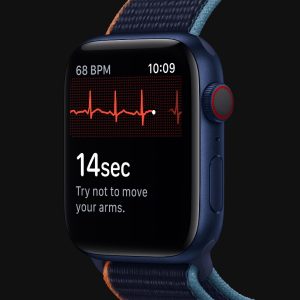 Apple has identified that a small percentage of 40mm Apple Watch Series 6 devices may be experiencing an issue which causes its display to go permanently blank. In light of this, the company has announced a worldwide service program for affected units, which includes the Malaysian region.

The smartwatches under this series were manufactured between April 2021 to September 2021, Apple added. To determine whether your Apple Watch Series 6 unit is eligible, key in its serial number or IMEI on Apple’s support page located here. To find these, first open the Settings app on the watch, tap General, and then look for Serial Number or IMEI. Alternatively, you can also check this via your iPhone device by opening up the Apple Watch app, navigate to My Watch, then to General, and tap About.

The program is available through all Apple authorised service providers nationwide, and the service itself is provided free of charge. For your convenience, you can find nearby service providers by visiting this page on Apple’s official website, though you may need to log in with your Apple ID first.

The company elaborates that the service program does not extend the standard warranty coverage of your Apple Watch, and it covers eligible devices under the specific series for two years after the first retail sale of the unit. Additionally, Apple also notes that affected watches featuring any damage that could impair the service will need to be repaired first, which in itself may involve a separate charge for the repair.