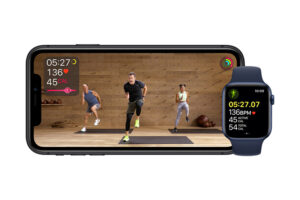 Apple has released a new workout series for its Fitness+ workout subscription service targeted at new mums. The series is aptly titled, “Get back to fitness after having a baby”, with routines specifically catered to new parents who want to get back in shape post-pregnancy.

The series is led by Fitness+ trainer Betina Gozo, a new mum who also led the platform’s series for pregnant women last year. The collection features seven 10-minute video sessions that include core and strength exercises as well as a mindful cooldown. It’s customised to target common physical demands of stress spots of early motherhood and includes pelvic floor exercises.

Additionally, the program was curated by the experiences of the trainers as new parents, as well as insights from an OB-GYN physician. Of course, the videos include a disclaimer encouraging new mothers to check-in with with their doctor to make sure they’re cleared for physical activity after giving birth.

Apple Fitness+ is a subscription service that requires an Apple Watch to fully take advantage of the watch’s integration. It’s included in the Premier tier of Apple One, along with access to other services offered by the company which costs RM69.90 per month. Alternatively, you can also opt for the standalone Fitness+ service for RM19.90 per month.