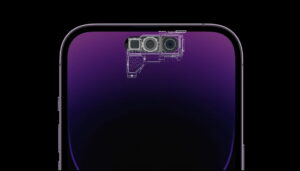 Under-display camera tech may have made the news a couple of times over the past few years, but so far no phone maker has managed to get it right. At least, not to a satisfactory level. Apple is, unsurprisingly, not among the companies that have given it a go yet, but that may change somewhat at the end of next year.

South Korean news outlet The Elec reports that Apple will be moving Face ID under the screen for iPhone 16 Pro models of 2024. And it is very specifically only the Face ID tech, as the normal front-facing camera will still be sitting in a cutout in the screen. That being said, this cutout will likely be smaller since the TrueDepth infrared camera is going underneath the display.

Naturally, Apple intends to move the regular front-facing camera under the screen too at some point. That being said, there’s no indication as to when the fruit company will actually achieve this. And when it does, it may leave the fate of the Dynamic Island in a bit of uncertainty, since it was made to disguise the cutout in the first place. But on that note, the report also notes that all members of this year’s iPhone 15 will sport the Dynamic Island feature, as opposed to only the Pro models if last year’s iPhone 14.

Should the timeline of the report be accurate, the implementation of the TrueDepth infrared camera under the phone’s display would be coming a little ahead of the first implementation of Apple’s own microLED screens. The company reportedly plans to implement its own display tech on the next Apple Watch Ultra first, with it coming to iPhones and other mobile devices later. But for the two to line up together, it would probably only happen in 2025, assuming the company’s current plans don’t get pushed back.