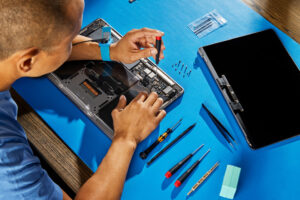 Apple surprised Right to Repair advocates and regular users alike when it unveiled the Self Service Repair programme last November. It provides authentic parts and repair tools to anyone that is willing to endure the manual labour that it takes to fix their iPhones at their home instead of going to authorised service providers.

In an elating twist, Apple’s most recent announcement reveals that the programme is now expanding to MacBooks. For now, it only covers the M1-powered MacBook Air And MacBook Pro, which might irate users of older models, but it’s still a good start.

The MacBook Self Service Repair programme offers over a dozen different parts for MacBook repairs including the display, top case with battery, and trackpad, with more options to be made available in the near future. Customers who wish to self-repair their MacBooks will first need to consult the repair manual to make sure they know which parts specifically to get.

Once they know what they need, customers can order the parts and tools from the Self Service Repair Store. The company says that the necessary components will also be available in Apple Stores and authorised service providers, with an assurance that each part is genuine.

Additionally, replaced parts can be sent back to the company for refurbishment and recycling with Apple rewarding customers with credit for doing so. For those who do not have the necessary tools to perform the self-repair, Apple also charges US$49 (~RM220) for a one-week rental of a hefty repair kit although it will be shipped free of charge.

While it is quite refreshing to see one of the biggest consumer tech companies in the world slowly embrace Right to Repair, the parts sold by Apple are quite costly and are just barely more affordable than shelling out for an authorised technician. While the programme’s availability is still limited to the US, the company says that it will be expanded to more countries later this year, starting with Europe, and will cover more MacBook models as well.