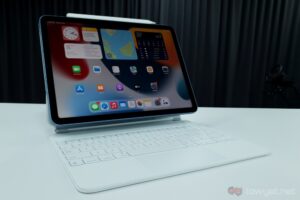 Apple has quite the range of tablets in its iPad range for an equally wide range of users and their requirements. Though one of those wants that has not yet been met is apparently turning the tablets into smart displays. And the fruit company is reportedly working on a dock that does just that.

Bloomberg reports that Apple is working on a device that will turn its iPad tablets into a smart hub and speaker. The idea is to have a smart home device that is placed on, say, a kitchen counter or at a nightstand. Previously, the news outlet noted that the company may be working a standalone product that does just that. But now, it’s possible that Apple is aiming to also make a dock of sorts that allows its iPad tablets to fill that role.

It’s worth mentioning that the report mentions the iPad, and this could mean the entire product line and not just specifically the entry level model. But all the same, it’s not completely impossible that the company wants the basic iPad to do more, since every other variant has made it obsolete besides the pricing element.

The report also notes that this is a functionality that was teased alongside the Google Pixel Tablet. Or more specifically, the accessory that will allow the otherwise generic Android tablet to be said smart home device.

All that being said, this new Apple iPad accessory will probably not be making an appearance anytime soon. The report notes that the product can see release as soon as 2023, which locks it out of any remaining launch events the iPhone maker has scheduled for this year. And the company has one planned for the reveal of its upcoming iPad Pro model refreshes, which is expected to star the new M2 chip.

The post Apple Working On iPad Dock To Turn It Into A Smart Display appeared first on Lowyat.NET.