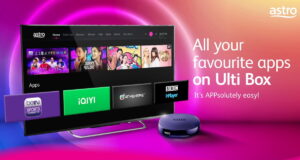 Astro recently has announced the rollout of additional streaming apps into its Ulti Box. In addition to Netflix and Disney+ Hotstar which was deployed earlier this year, the connected TV box which provides output with resolution of up to Full HD now also offers beIN SPORTS CONNECT, iQIYI, TVBAnywhere+, and BBC Player.

The rollout for Ulti Box came just a week after the BBC Player was added to Astro Ultra Box. The 4K TV box itself also just received the three other streaming apps back in September.

Naturally, access to these apps depends on the Astro pack that you have subscribed to. For those who opted for Premium 2 or Platinum Pack, beIN SPORTS CONNECT, TVBAnywhere+, and BBC Player come as standard.

Outside of these packs, beIN SPORTS CONNECT is also available for Sports and Sports Plus subscribers. For customers that subscribed to Entertainment, Entertainment Plus, or Premium 3 Pack, they are able to utilize BBC Player.

As for TVBAnywhere+, it is available for customers that picked up Chinese Favourites selection for their Entertainment, Entertainment Plus, Premium 2, Premium 3, or Platinum Pack.

In the case of iQIYI, it requires a standalone Standard VIP subscription which costs RM8.90 per month for Astro customers. Alternatively, one can also go for the full-blown Premium VIP plan which provides advanced previews for selected contents, 4K resolution, and up to four concurrent screens for a monthly price of RM12.90.

Meanwhile, there have also been some changes to the user interface on both Ulti and Ultra connected boxes as well as Astro GO mobile app. According to the company, all three platforms now have a sleeker UI alongside quicker access to the TV Guide and popular content from the Home Page.

Specific to Astro GO, the app now has Picture-In-Picture mode which would allow users to continue watching their shows on a floating player while using another app on their device. Whenever users watch Premier League and UEFA Champion League matches, the app’s Interactive Mode will kick in as well, allowing them to see instant highlights, match & player statistics and future match fixtures.