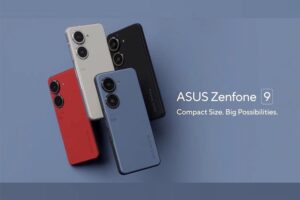 ASUS just revealed its ROG Phone 6 not too long ago, and is fearing up for the reveal of the Zenfone 9. Though details of the non-gaming flagship device can already be found out in the wild. This is thanks to an official promo video on the device that was published on the company’s YouTube channel ahead of schedule. The video is gone now, but the damage has been done.

As XDA reports, the ASUS Zenfone 9 will sport the same Qualcomm Snapdragon 8 Plus Gen1 chipset that the ROG Phone 6 has. So nothing to worry about on the performance side of things. As for the display, it will be sporting a more modest 5.9-inch AMOLED display with a 120Hz refresh rate. Powering everything is a 4300mAh battery. The main camera is a 50MP Sony IMX766 shooter, though no details on what the other camera is on the back, nor what sits in the screen’s punch hole cutout on the top left corner.

Other interesting details about the ASUS Zenfone 9 include the presence of the rare 3.5mm audio jack, an IP68 rating, and dual stereo speakers. There’s also a side-mounted power button / fingerprint sensor, and this will also support gesture controls. This includes the ability to scroll up or down on the screen by doing so on the power button instead. Which looks nifty to be sure.

Overall, the ASUS Zenfone 9 looks pretty much like what you’d expect from the series. It’s probably strange to see a phone with a screen that’s smaller than six inches, and one that still has the 3.5mm audio jack. These are all things that you’d probably expect from a Sony phone before it adopted its new signature 21:9 aspect ratio screens. So if you were a fan of that, then the Zenfone 9 looks to be delivering on that front.

All that being said, ASUS has yet to officially announce the phone just yet. But since all this information came from the company’s own YouTube channel, an official unveiling is just a matter of time.

The post ASUS Zenfone 9 Revealed Via Video That Went Up Too Early appeared first on Lowyat.NET.