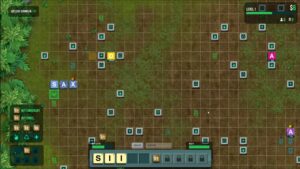 While battle royales are primarily shooters, there are weird ones that manage to work the new trend in gaming into unintuitive titles. For example, there are two variants of battle royale Tetris out there. But now, with Babble Royale, the genre has made its way into Scrabble.

Like most battle royale games, you drop into a spot of your choosing on the board. Only instead of as a person with a gun, you drop in as a letter in the alphabet. You then start assembling words like you would in the proper board game. Your “character”, as it were, changes from the initial letter to the last word you formed, which continues to change as you form more words.

The battle royale part comes in when words are linked to another on the board. If someone links to you, they eliminate you. So you have to link to other words while preventing them from linking to you. Then you have the usual shrinking zone to huddle players together as time goes on.

Babble Royale just entered Steam Early Access recently as a free-to-play title. But since it is f2p, monetisation comes in the form of letter tile customisation. And each letter gets their own, so you can imagine the amount of money one can sink into the game. But you can also go the premium route by getting the Free To Play Sucks Lifetime Pass for US$60 (~RM253), which is very pricey to say the least, especially for an early access indie game.

It’s also worth noting that a couple of reviews indicate that two-letter words are the norm. So it’s definitely more battle royale than actual Scrabble.