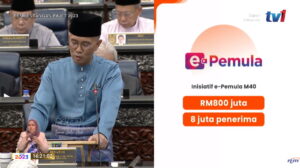 Finance Minister Tengku Zafrul has announced a brand-new ePemula program that is meant for individuals under the M40 category. Originally known as the eStart program, it was first introduced for the youth during the tabling of Bajet 2022.

According to the minister, the M40 category covers those who have an annual income of under RM100,000 which roughly equals RM8,334 per month. Individuals that are eligible for the ePemula M40 will be provided with a free e-wallet credit worth RM100.

To deliver this program, Tengku Zafrul said that it will involve an allocation of RM800 million. He also added that around 8 million individuals are expected to benefit from this M40-specific ePemula implementation.

However, the minister did not reveal further details regarding the program although this is something that is not out of ordinary. Even for the ePemula program that took place earlier, a lot of the details regarding it were only revealed months after the original announcement in October 2021.

In fact, there was a gap of around six months before the actual rollout of the ePemula 2022 program took place. Hence, you can surely expect to hear more  details from the Ministry of Finance regarding the ePemula M40 in due time.