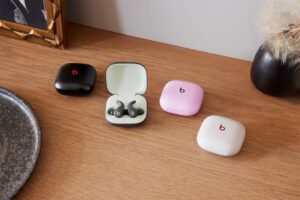 The Beats Fit Pro wireless earbuds are now officially available for purchase via Apple’s Malaysian website. The earbuds were first launched in the US back in November, while their worldwide release was announced to be slated for 28 January 2022 – though it seems that Malaysia is getting it a couple of days early.

The earbuds come with both adaptive Active Noise Cancelling (ANC) and a transparency mode, as well as support for head-tracking Spatial Audio. It is also equipped with the Apple H1 chip, giving it many features that AirPods users enjoy; including instant pairing, audio sharing, and seamless audio switching between devices.

The Beats Fit Pro are marketed as fitness earphones, so they come with flexible wingtips that should keep them snug in your ears while working out. They are also IPX4 water-resistant, feature auto play/pause when you take them out, and uses Class 1 Bluetooth technology with a range of up to 100 metres.

As for the battery life, Beats claims a six-hour battery life with ANC turned on, with an additional 18 hours with the charging case, though Beats’ original press release claimed 21 hours of battery life from the case. Once low on battery, five minutes of Fast Fuel charging will give you an hour of listening time.

For controls, the earbuds have a single tactile “b” button on each bud for changing listening modes, taking calls, and activating the voice assistant. The buttons can also be remapped to adjust the volume. Additionally, most of the earbuds’ features are compatible with Android through the Beats companion app.

Priced at RM909, the Beats Fit Pro come in black, white, purple, and grey. Malaysians can pre-order the product now and, according to the product page, it will start shipping on 27 January. The earbuds ship with a USB-C to USB-C cable but as with most Apple products, it doesn’t come with a charging brick.