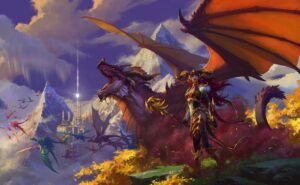 Two years after the announcement of its last expansion, Shadowlands, Blizzard Entertainment (Blizzard) today pulled back the veil on the next expansion for its MMORPG, World of Warcraft. The next expansion is called Dragonflight and as you can more or less surmise from the title, the expansion revolves around the theme of, you guessed it, dragons.

According to the game’s official fluff, Dragonflight will shift its focus from the calamity in the realm of the Azeroth’s afterlife to an entirely new peril involving the Aspects of Azeroth, otherwise known as the Dragonflights of the realm. As with all WoW expansions, Dragonflight will also be introducing and adding several new elements and features to the game.

Firstly, players will now be sent to a new map, known as the Dragon Isles, which are located in the Northwest of Azeroth. Not only that, but the Dragonflight expansion will also increase players’ level cap to 70 – up from 50 – and allow them to explore four new zones within the map: the Walking Shores, Ohn’ahran Plains, the Azure Span, and Thaldraszus.

Dragonflight will also be the first expansion to introduce both a unique race and class to the game called the Dracthyr Evoker. In keeping with the dragon theme, Dracthyrs are dragonkin who long laid dormant within the Dragon Isles, only to be awakened by a new event. Much like the Pandaren race and Death Knight class, Dracthyrs can join either Alliance or Horde factions, depending on which side the player is on.

With the new Dracthyr race also comes a new race-specific class called the Evoker. In effect, the Evoker class will allow Dracthyr players to take on the role of healer with specialised dragonkind skills, or act as a ranged damage-dealer using dragon-related attacks, such as breaths, fangs, and claws.

Moving on, Blizzard is also saying that Dragonflight will be introducing new and extensive updates to WoW’s talent and profession systems, as well as new raids and dungeons. Unsurprisingly, there is still no official availability date for Dragonflight, but the good news is, you can already opt-in for the beta.

The post Blizzard Announces Next World Of Warcraft Expansion appeared first on Lowyat.NET.