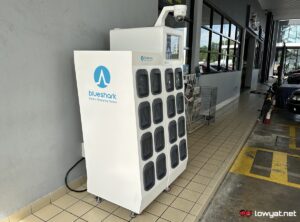 Sharkgulf Technologies Group and EP Manufacturing Berhad (EPMB) officially introduced the Blueshark R1 electric motorcycle in Malaysia back in October. In order to address concerns that potential R1 owners in Malaysia might have such as range anxiety and battery charging, Blueshark has planned to deploy battery swapping stations in our market.

With a maximum travel range of between 110 to 160km depending on the driving mode, the 4G-enabled electric motorcycle has also been equipped with plenty of other features such as a dual-camera driving recorder system, ultrasonic sensors, Reverse Assistance Mode, Bluetooth support, virtual exhaust sound, and many more. As for Blueshark’s battery swap technology, it has apparently received approvals from the Road Transport Department (JPJ).

Fast forward to November, Blueshark Malaysia has signed an MoU with Petronas Dagangan Berhad (PDB) to develop the electric motorcycle battery swapping business. As part of the deal, Blueshark Battery Swapping Stations will be installed at nine Petronas stations in phases.

Just slightly more than a month after the MoU was signed, it looks like Blueshark and PDB have already decided on the first location for the battery swapping facility. First revealed through Blueshark Malaysia’s Instagram story, the first Blueshark Battery Swapping Station has been installed in Petronas Batu Tiga at the Federal Highway.

As you can see from these images, this particular kiosk is able to support 16 batteries altogether. Comes complete with its own CCTV, Blueshark users are able to operate the swapping station through its touch screen although when we visited the station earlier today, it was not yet operational.

Nevertheless, we did record a demonstration of how the station works during the launch of R1 back in October:

At the moment, we don’t know why Blueshark and PDB chose Batu Tiga as the initial location but then again, the Petronas station was not far away from Blueshark’s Glenmarie showroom. Early information that we have received pointed out that the next swapping stations will be installed at Seksyen 13 Shah Alam, USJ 6 Subang Jaya, and Desa Mentari Petaling Jaya although we are still not able to officially confirm this information with Blueshark.

During the motorcycle’s official Malaysian launch back in October, Blueshark did say that it planned to offer the R1 to the public although, at that time, the company want to focus on the commercial pilot first which was supposed to start last month. We don’t know whether there have been changes to the plan but we have begun hearing whispers that the R1 will be made available to the public in early 2023.

Regardless of that, given the deployment of its battery swapping stations, we reckoned that you might be able to sport R1 on the road very soon especially if you are in Klang Valley.