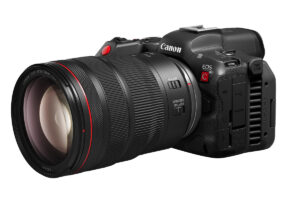 The EOS R5 C that was launched in certain markets earlier in January this year will be making its way locally this March, Canon Malaysia announced. The camera is a video-oriented variant of the original R5 model, featuring the ability to shoot footage of up to 8K and comes with a new active cooling system that enables it to record high resolution videos for long periods of time.

As a refresher, the Canon EOS R5 C is equipped with the same full-frame 45MP sensor as the base model. Along with it is the company’s Dual Pixel CMOS AF II system and Digic X image processor. Unlike the original EOS R5, however, this particular variant lacks an in-body stabilisation system. Additionally, newly introduced on the camera is a mode switch that activates either the standard R5 mode for photography, or the Cinema EOS mode for video capture.

The EOS R5 C is capable of delivering continuous burst shots at 12 fps via mechanical shutter or 20fps via electronic, and can also record 8K at 30 fps on battery and up to 60 fps when plugged to an external power source. Onboard are three different 8K 12-but RAW modes and a 10-bit XF-AVC mode for 4K videos. It is worth noting that videos that are shot in 4K or 1080p are oversampled from 8K for improved quality and reduced noise.

As mentioned earlier, the camera features a new active cooling system which gives it a wider side profile than the base R5 model. Cold air is pulled in through an air intake located on the right side of its built-in 3.2-inch 2.1M dot TFT LCD vari-angle screen, which is then vented out on the left side. Other than that, the EOS R5 C includes a 0.5-inch 5.76M dot OLED electronic viewfinder, a dedicated timecode interface for multi-camera shoots, a multi-function shoe, CF Express (Type B) and SD UHS-II memory card slots, a USB-C port, a micro HDMI port, microphone and headphone jack combo, as well as Wi-Fi and Bluetooth 5.0 connectivity.

The new Canon EOS R5 is slated to arrive in Malaysia in March, though no specific date has been revealed. The company confirmed with Lowyat.NET that the camera will retail at RM 19,899 body only.