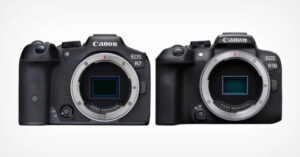 Canon has recently launched two new cameras to its EOS R line with the introduction of the EOS R7 and EOS R10. What’s significant about the duo is that they both feature APS-C sensors, which is a first for the camera maker’s full-frame dominated line-up.

Of the two, the new Canon EOS R7 is the more high-end offering, featuring a large 32.5MP APS-C CMOS sensor with 1.6x crop factor that is paired together with the company’s DIGIC X image processor. This entails for high-speed readouts of up to 30 fps continuous shooting with AF/AE tracking, as well as producing high quality images and videos at up to 6960 x 4640 px (JPEG L/RAW/C-RAW/HEIF) resolution and up to 4K UHD Fine (7K oversampling) respectively. The camera also comes with In-Body Image Stabilisation (IBIS) of up to 8 stops, an ISO range of 100 to 32,000 (expandable to 51,200), and Canon’s Dual Pixel AF II system which offers extensive autofocus and tracking coverage across the whole frame.

Design-wise, the R7 sports the very familiar Canon EOS R-style body built from durable magnesium alloy with weather-proofed parts and weighs at approximately 612 grams. Being part of that particular series, the camera also comes with a mount that supports the brand’s EOS RF lenses. Meanwhile, on its back is the all-new Quick control dial with integrated joystick, a 2.3m dot electronic viewfinder (EVF), and a 3-inch 1.62m dot vari-angle touchscreen LCD. Besides that, the new shooter also comes with two UHS-II SD card slots, built-in Bluetooth and WiFi connectivity, a USB-C port, the usual multi-function shoe for external attachments, and supports Canon’s LP-E6NH battery.

The Canon EOS R10, on the other hand, is equipped with a smaller 24.2MP APS-C CMOS sensor with 1.6x crop, though it also comes with the same DIGIC X sensor as its sibling. Its readout is slightly slower at up to 23 fps with AF/AE tracking, while its image quality comes in at up to 6000 x 4000 px resolution for stills and up to 4K UHD (6K oversampling) for videos. In addition, the camera features an ISO range of 100 to 32,000 and the Dual Pixel AF II system for autofocusing and tracking. However, unlike its sibling, it does not come with in-body image stabilisation, though it does feature support for Optical Image Stabilisation (OIS) equipped lenses.

The camera also sports the same lens support and shares a similar EOS R design language as the R7, but with noticeable differences. These include its slightly smaller body and lighter weight of only 429 grams, as well as the lack of its sibling’s Quick control dial. Also onboard the EOS R10 is a 2.36m dot EVF, 3-inch 1.04m dot LCD touchscreen, a single UHS-II SD card slot, built-in Bluetooth and WiFi connectivity, a USB-C port, pop-up flash, multi-function shoe, and LP-E6NH battery support.

As mentioned earlier, both devices are the first APS-C shooters to enter the EOS R series, thus making them the more affordable options for consumers. This is especially to those who prefer the brand’s considerably more professional line outside of its compact EOS M models, which mostly come with APS-C sensors. In addition, the introduction of the EOS R7 also means that Canon finally has a proper contender to the Fujifilm X-T4 and Nikon Z fc.