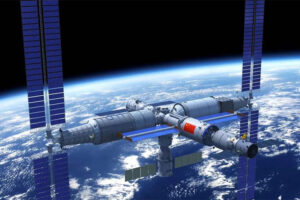 China has filed a complaint to the United Nations (UN) after its Tiangong space station had to manoeuvre out of the way twice this year to avoid collisions with SpaceX Starlink satellites. The near-collision events occurred on 1 July and 21 October, with the latter happening just days after a new crew had boarded the station.

The first incident in July apparently happened when a Starlink satellite shifted from its regular orbit of 555km to a 382km orbit which put it at risk of colliding with Tiangong. Later in October, the space station found a Starlink satellite that was “continuously manoeuvring” and made it difficult to predict its path which prompted China to move Tiangong away for the safety of its astronauts.

In the complaint to the UN Secretary-General, China has asked the UN to remind countries that parties in the Outer Space Treaty hold responsibility for activities in space, even if they involve private companies from those countries. However, the country didn’t make any suggestions on how to rectify the issue.

SpaceX’s Starlink is a satellite constellation that aims to provide worldwide satellite internet connection. It has so far launched a total of 1,944 satellites with a long-term goal of 42,000. This isn’t the first time that the company has had a potential disaster, as a European satellite similarly had to dodge a Starlink satellite in 2019  after it temporarily became unable to communicate due to a bug.