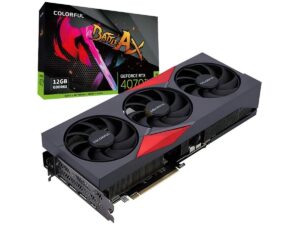 Colorful, the Chinese GPU maker, has more or less confirmed the technical specifications of NVIDIA’s GeForce RTX 4070 Ti. The card, which is technically the rebranded GeForce RTX 4080 12GB that the GPU brand unceremoniously “unlaunched” back in October.

As per Colorful’s official product page for its Tomahawk Deluxe RTX 4070 Ti (it has since been taken down), the card will be centred around the AD104 GPU and ship out with 12GB GDDR6X graphics memory. The card will also have a base clock of 2.31GHz and boost clock of 2.62GHz, although this could be tweaked ever so slightly by the AIB partner. Meanwhile, its graphics memory will run at a frequency of 21Gbps, as well as have a 192-bit memory bus.

Additional details of the RTX 4070 Ti also include a memory bandwidth of 504GB/s, all par for the course with NVIDIA’s mid-tier card. As with all its RTX 40 Series GPUs, the card will also be using the same 16-pin PCIe Gen5 or 12VHPWR connector to power itself up, while its TDP is rated at 285W. There

Beyond that, leakster site didn’t manage to siphon any further data from Colorful’s product page, although we already know what else to expect from the card. This includes 7680 CUDA cores, 3rd generation RT Cores, 4th generation Tensors, and support for DLSS 3.

As for the custom-cooled RTX 4070 Ti itself, we can’t say that Colorful is the most creative of all of NVIDIA’s AIB partners. At a glance, the cooler shroud of the Tomahawk Deluxe looks like it took inspiration from Gigabyte’s Eagle lineup. Also, it’s definitely a very block GPU but having said that, it is also the second most uniform looking design we’ve seen, the first being ASUS’ new ROG Strix cooler shroud design for the RTX 40 Series.

The GeForce RTX 4070 Ti is expected to launch next month on 5 January during CES 2023. The company