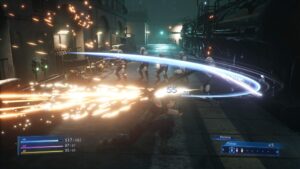 Here’s a hot take: FF7 on its own is overrated. Its Crisis Core prequel, on the other hand, not only more than lives up to the hype, but also carries entry number seven on its back. Those who had a PSP would probably have experienced the game back when it was released in 2007. Now, everyone else gets to experience peak FF7, as Square Enix has announced Crisis Core: Final Fantasy VII Reunion.

The announcement was made during the Final Fantasy VII 25th anniversary stream. As you’d expect from a remaster, you get updated 3D models. but not quite expected is the addition of “full voiceovers” and new music arrangements. Some would consider this a remake, but the changes aren’t really substantial enough for that categorisation.

if you’re unfamiliar, Crisis Core: Final Fantasy VII expands on the story of Zack Fair, Cloud’s predecessor and arguably the better protagonist. And with Zack’s story getting fleshed out, this only widens the gap between him and Cloud. The events of the game take place before FF7 proper, hence the prequel tag. It also has quite the tearjerker ending.

Crisis Core also had an interesting combat system that can be considered the genesis, pun not intended, of what we see not only in Final Fantasy XV but also the FF7 remake. From the look of things, this will be retained rather than updated to fit what’s currently in the remake of the main game.

According to the trailer, Crisis Core: Final Fantasy VII Reunion will be available on both generations of both console platforms, the Nintendo Switch, and also Steam for PC. It doesn’t yet have a concrete release date, but instead it has a release window of “this winter”. Which can be anytime between December and February of next year.