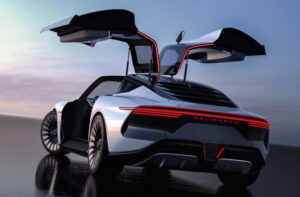 This might sound silly, but some people out there deemed the 1981 DeLorean DMC-12 as a magical being. While it was only in production for less than three years, the car’s legacy still lives on to this day, mainly thanks to its role as the Time Machine in the highly successful movie franchise, Back To The Future.

41 years after the original model, now it is time to meet the future of Delorean which comes in the form of the newly revealed Alpha5 EV. Ahead of its public unveiling event in August, the company today has published the first full look at its new EV.

Similar to the 1981 model, the new DeLorean Alpha5 is once again designed by Italdesign. To suit the modern era and its EV nature, it is not surprising to see that the Alpha5 has a more aerodynamic design than its 1980s counterpart with an estimated drag coefficient of just 0.23.

That being said, several elements of the new car are still inspired by the DMC-12 including the gullwing doors, louvred rear window, and turbine-like wheel design. However, the company did not reveal the exact specifications of the car and it is also unclear whether customers can have flux capacitor or/and Mr Fusion with their Alpha5…sorry, just have to mention that.

Equipped with a 110kWh battery, the company estimates that the Alpha5 can travel for more than 300 miles (~482km). With production expected to start in 2024 in Italy, DeLorean is planning to sell the first 88 units as a special edition model that will be earmarked for track-only usage and also act as NFT avatars.

Only then, the road-legal units will be released to consumers albeit still in low volume. DeLorean is also planning to launch more models in the near future including a V8-based sports coupe, EV saloon and hydrogen-fuelled SUV.