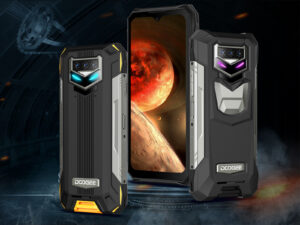 DOOGEE has fully unveiled its upcoming rugged smartphone series, the S89 and S89 Pro. The series features an even bigger battery capacity than its predecessor, shipping with Android 12 out of the box and with plenty of certifications to prove its outdoor worthiness.

For starters, both phones sport a 6.3-inch LCD display packed in a thick, rugged chassis with a side-mounted fingerprint scanner. The devices are rated at IP68 and IP69K for 1.5M water resistance and PM2.5 dust resistance, while the MIL-STD-810H standard means the DOOGEE S89 series is drop-proof from up to 1.5 metres.

As for the internals, both the S89 and S89 Pro run on a MediaTek Helio P90 chipset, with the former running a configuration of 8GB+256GB while the latter gets 8GB+256GB, though both have a microSD slot that supports up to 512GB of additional storage. The phones also have LED “eyes” on the back, which have customisable colours and lighting patterns.

The phones feature a triple camera setup consisting of an 8MP ultrawide sensor that doubles as a macro lens, a 20MP infrared sensor for night vision, and for the main lens, the standard S89 has a 48MP camera while the Pro variant is equipped with a 64MP camera. Up front, the phones get a 16MP selfie shooter.

Powering the rugged phone series is a behemoth 12,000mAh battery with 33W charging for the vanilla model and 64W for the Pro version. DOOGEE claims that the phones can last up to 18 hours on video playback and for the Pro, it only takes a little over two hours to fully charge. It’s unclear if the S89 series supports reverse charging.