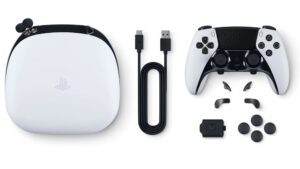 Back in August, Sony Interactive Entertainment announced the DualSense Edge, the Pro controller equivalent for the PS5, and Xbox Elite Controller 2 counterpart. At the time of announcement, the company did not yet have pricing and availability details to share. That has since changed, with a price that will definitely put anyone’s financial senses on edge.

But before we get into that, let’s take a look at what the entire DualSense Edge package contains. In addition to the controller itself, you also get a carrying case, a braided cable to connect it to your gaming machine, and a bunch of swappable parts. This includes the two standard analogue stick caps, two tall variants and two shorter variants. For back buttons, you get a pair of the common paddle types, as well as a pair of half-dome buttons.

To quickly go over again, the DualSense Edge is, as mentioned, the PlayStation equivalent of the Xbox Elite series of controllers. Trigger travel distance can be adjusted to your liking. Ditto analogue stick sensitivity and dead zones. The analogue stick modules themselves can be swapped. You can even save profiles on it like it was a gaming mouse or keyboard. All this is in addition to all the next-gen magic of the base DualSense – adaptive triggers and haptic feedback.

Though while the DualSense Edge has some advantages over other Pro controllers, it has its own drawbacks. One is that there is only one pair of extra paddles at the back, compared to the two you’ll find on an Xbox Elite controller. You are also stuck with with the default four-way D-pad, which is bad news for fighting game players who still prefer controllers over arcade sticks.

And now, we get to the price. The DualSense Edge, and all the accessories that come with it, has an asking price of RM999. Which is understandably steep, but it’s worth pointing out that it’s pricier than the Xbox Elite 2, which can commonly be found locally for RM899, if not lower. If its analogue sticks get a case of the drift, replacement modules can be bought for RM99 each. All this will be available starting 26 January of 2023.

The post DualSense Edge Launches On 26 January 2023 For RM999 appeared first on Lowyat.NET.