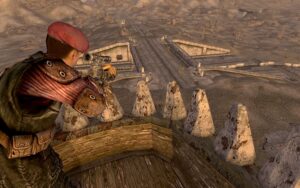 Love it or hate it, Fallout: New Vegas is among the better received titles in the series, and it’s one that’s not entirely developed by Bethesda in-house. That game was made by Obsidian Entertainment, and with the souring of relations between the two following the release of the game, a sequel was unlikely. But now that both are under the Microsoft umbrella, things are reportedly looking to change.

Journalist Jeff Grubb claimed in his Grubbsnax podcast that “people have begun to have talks and say these two words in sentences. And those words are Obsidian and New Vegas 2”. But these talks are still in the very early stages, so if a game does materialise from it, it’s still years away from it happening.

Grubb says that Microsoft doesn’t want to leave the Fallout series in limbo while Bethesda works on Starfield and The Elder Scrolls VI. Bethesda’s Todd Howard previously said that the company will only work on Fallout 5 after the aforementioned two games come out. It makes sense to some extent to put out a sequel to a successful spinoff in the meantime.

All that being said, the supposed Fallout: New Vegas 2 won’t be out anytime soon. With Starfield releasing at the end of this year, we’ll definitely be seeing that game release first before the spinoff’s sequel.