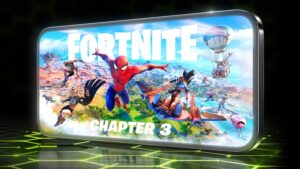 Fortnite was kicked out of the Apple App Store on iOS back in August of 2020. But it looks like the game may be able to make it back onto the platform sometime this year. At least, that’s according to a tweet by Epic Games head Tim Sweeney.

Or rather, a short chain of two tweets. The first one simply reads “Next year on iOS!” with the second one showing a screenshot of Fortnite with 2023 fireworks display. There’s a pretty big gap of seven or so hours between the two, and even the first one is dated 1 January for those of us on this side of the globe. But thanks to timezones, the first one is likely made while it was still 31 December wherever Sweeney is.

As it always is with teasers like this, the tweets themselves are devoid of details as to the way this will actually happen. One way for this to happen, is that Epic Games and Apple actually coming to an agreement of some sort to make this happen. This seems pretty unlikely considering the legal fallout.

The more likely option will be when the Digital Markets Act (DMA) in the EU becomes applicable in the near future. The act does many things, but the relevant bits in this case come in the form of device neutrality. In other words, Big Tech companies like Apple and Google must allow users to install third party software, as well as allowing the deletion of pre-installed ones. This includes alternative app stores.

As Bloomberg reports, companies are only required to comply with all of the associated rules in 2024. But bracing for these changes, the report notes that Apple is already working on changes internally to make for a smoother transition. This will likely be the vector that Epic Games will make use of to bring Fortnite back onto iOS.

All that being said, none of what’s mentioned above is set in stone yet. It’s still unclear if Epic Games will indeed be able to bring Fortnite back to iOS. Even if it happens, it’s unclear if this will be via a direct route, or via the company’s own third party app store. Tim Sweeney will probably share more details as it gets closer to actually happening.

The post Fortnite To Return To iOS This Year, Tim Sweeney Claims appeared first on Lowyat.NET.