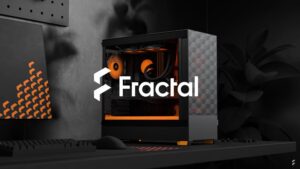 Fractal Design officially launched a brand new casing series, known very catchily and simply as the Pop Series. As per the official fluff, the new lineup sees Fractal fusing style and function into what can best be described as elegant yet eye-catching.

Specifically, the Pop Series can be categorised into two SKUs, Pop Air and Pop Silent. Further, each SKU will be available in three sizes: there’s a standard size, a Mini, and lastly, there’s XL.

Starting with the Pop Air, the lineup offers a familiar design to customers, with Fractal (sort of) carrying forward the pixelated mesh design from its Meshify series. With this series, the casings now sport a honeycomb-patterned mesh that just barely gives a glimpse of the fans behind it, drawing in the airflow in bright vivid RGB colours.

Speaking of colours, the standard chassis of the Pop Air also comes in up to nine different vivid colours for its motherboard plate, drive trays, and exterior accents. These colours include Cyan, Magenta, Green, and Orange Core, among others. Unfortunately for the Mini and XL versions of the Air, they’re only available in Black or White.

As for what sort of motherboard support you get, it all depends on the size you choose. The standard Pop Air will support up to an ATX board, mATX for the Mini Air, and up to an eATX board for the XL Air.

Moving on, there’s the Pop Silent lineup that is clearly designed with noise and sound dampening in mind. The design of the casing clearly looks more minimalistic than the Air series, plus it’s a damn sight more elegant looking. Like the Air Series, it is also available in three sizes, with each chassis accommodating the corresponding motherboard sizes.

Be it the Pop Air or Silent series, both series are designed to house between two and six HDDs or SSDs, feature a tempered glass side panel, and above all else, look good when on display.

At the time of writing, Fractal Design did specify availability or pricing for the new Pop Series.