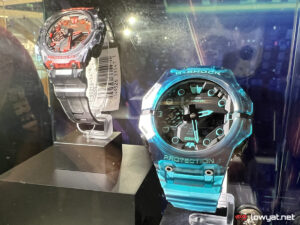 Casio today has launched the new G-Shock GA-B001 watch series in Malaysia. The new line-up will be arriving locally next month on 7 October 2022, available in four different colours. Most interestingly, half of which come with transparent casing and straps – a design which the company claims is inspired by virtual reality.

The G-Shock GA-B001 is also the first from the brand to feature an all-new integrated bezel and band construction, comprising two separate components that connect at the 9 and 3 o’clock positions. It also features a moulded design that follows the lines of the wrist, which minimises the space between the watch and the user’s wrist.

According to Casio’s G-Shock design team, future line-ups will be based on this new build, on top of other new improvements and features. The company adds that fans can expect these newer watch models sometime next year.

Despite its new construction, the newly launched G-Shock model still comes with the brand’s signature rugged shock resistant build made from carbon and resin materials, and has a water resistance rating of 20 ATM. The watchface itself is both analog and digital, featuring rivets in place of hour markers as well as a small display for the date, time/world time, and so on.

Onboard features include the Bluetooth-based Phone Link function that links to the G-Shock companion mobile app for time synchronisation, and a Phone Finder tool which forces your phone to omit a loud alarm-like sound for detection. Unfortunately, the built-in watch-to-phone connectivity on the GA-B001 does not come with notification functions. Besides that, there’s the useful Hand Shift feature which moves the watch hands out of the way to provide an unobstructed view of the digital display.

As mentioned earlier, the new G-Shock GA-B001 series is slated to arrive in Malaysia on 7 October 2022 via the official Casio website and authorised resellers nationwide. The transparent variants will be available in black or blue colours at a retail price of RM 695, while the solid variants are offered in either red or black colours at RM 645.