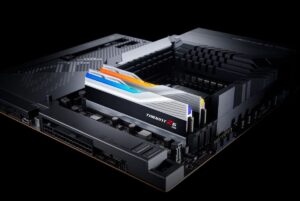 G.Skill recently announced two new memory kits, launched under its Trident Z5 RGB lineup. The kits in question are both DDR5 and are available in two frequencies, 6400MT/s and 6800MT/s, the latter being one of the fastest the brand has produced, to-date.

It should be pointed that the new Z5 RGB kits are technically designed to work with Intel’s 12th generation CPUs and Z690 chipset. To that end also supports the chipmaker’s Xtreme Memory Profile (XMP) 3.0 overclocking profiles. To be clear, these kits aren’t AMD EXPO ready but as with all memory kits, there shouldn’t be any issue using them with AMD’s new Ryzen 7000 Series CPUs and their corresponding AM5 chipset.

In its official press release, G.Skill says that both its 6800MT/s and 6400MT/s Z5 RGB memory kits have been validated by pairing it with an Intel 12th generation Core i7-12700K and ARUS ROG Maximus Z690 Hero motherboard.

By our count, this is the second time G.Skill has launched a new DDR5 kit in a year. The first time was back in April this year when it announced a 64GB (2x 32GB) DDR5 Trident Z5 kit, with a maximum speed of 6000MT/s and CL timings of 30-40-40-96. Then as now, it was designed primarily to be paired with Intel’s Alder Lake generation CPUs and chipset.

As mentioned earlier, the new Z5 RGB kits aren’t AMD EXPO compliant, but it should come as no surprise that G.Skill would already have one or several memory kits that are definitely more in tuned for AMD’s Ryzen 7000 series.