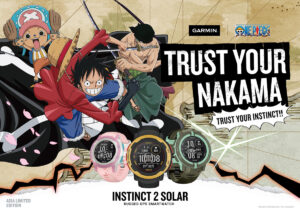 Design-wise, all three Instinct 2 Solar One Piece limited edition watches are indifferent to their base models, so the only thing that sets them apart are their colour themes. The Monkey D. Luffy edition is presented with a black overall theme with gold and red accents, whereas the Roronoa Zoro version comes with an olive body with turquoise accents and camouflage themed straps. Meanwhile, the Tony Tony Chopper edition of the Garmin Instinct 2S Solar sports a body with hot pink, white and teal colours, as well as light pink straps that are decorated with sakura motifs. Each device also features unique watchfaces that contain skull logos of their respective characters.

There are no changes in hardware for all three smartwatches, so here’s a recap of their specs – particularly the Solar versions of the Instinct 2 and 2S. Both models come with monochrome, sunlight-visible and transflective memory-in-pixel displays, as well as multi-satellite positioning support (GPS, GLONASS and Galileo), Bluetooth connectivity, Android and iOS compatibility, and are water resistant at 10ATM.

You can also expect onboard smartwatch features such as notifications and music playback controls, a variety of sensors including heart rate and blood oxygen levels, as well as numerous health and workout features such as sleep tracking, women’s health monitoring and more. Garmin touts the Solar variants of the watches to feature near-unlimited battery life, provided that they receive sufficient exposure to sunlight.

The new Garmin Instinct 2 Solar One Piece limited edition watches will be on sale in Malaysia on 5 May 2022, in commemoration with protagonist Monkey D. Luffy’s birthday. All three models are priced at RM 2,299 (RM 200 more than the base versions), available through all Garmin stores nationwide, its official stores on Lazada and Shopee, as well as the AECO e-store.