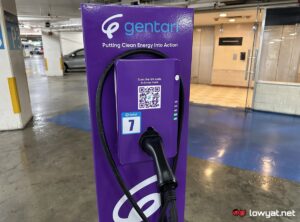 The green energy arm of Petronas, Gentari has recently installed more than 20 electric vehicle chargers at Suria KLCC. In general, it is one of Malaysia’s largest EV charger deployments in a single location that we know so far.

Given how Suria KLCC is also related to Petronas, one may assume that this deployment is not exactly a hard task for Gentari. Nevertheless, it is still impressive work by the company which just turned on its first batch of EV chargers a few months ago.

For clarity, Suria KLCC’s car park already has 20 22kW AC chargers prior to Gentari’s new deployment. However, they were installed inside the Premium Parking area which costs an additional RM10 on top of the mall’s standard parking fee although users can charge their EV for free as long as they bring their own Type 2 charging cable.

Just like its previous chargers, EV owners can activate these new Gentari chargers through Petronas’ own Setel app. Alternatively, these chargers can also be utilized through the JomCharge app which is operated by Gentari’s close partner and a well-known name within the local EV industry, EV Connection.

Interesting enough, both apps noted that these Gentari chargers are only open to the public between 6 PM to 6 AM during weekdays. However, they are available 24 hours throughout Saturday, Sunday, and public holidays.

Meanwhile, EV owners are currently able to utilise the new Gentari chargers at Suria KLCC car park for free until the end of September although do note that they still have to pay the normal parking fees. However, neither the company, Setel, nor JomCharge has revealed the actual charging fee that EV owners need to pay from October onwards.