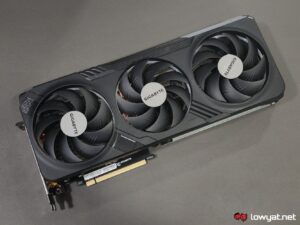 NVIDIA’s GeForce RTX 4070 Ti is the GPU brand’s first card of the year, officially, but it is also the card that comes bundled with its own drama series. From an unceremonious “unlaunching” near the end of last year and to being a good US$400 (~RM1759) cheaper than the defacto RTX 4080, the punchline is that the card hasn’t even made it out to store shelves.

The RTX 4070 Ti that I’ve been handed is custom-cooled and more specifically, it is part of Gigabyte’s Gaming OC series. While inherently made to blow 1440p performance out of the water, NVIDIA also says that the card is more powerful than even, dare I say it, last generation’s RTX 3090 Ti.

Well then, let’s see how this plays out.

Let’s be clear on one thing: there will not be a Founders Edition of the RTX 4070 Ti, meaning that NVIDIA is leaving the cooling and cooler shroud designs entirely in the hands of its AIB partners. This is a little surprising, given that we usually see this sort of behaviour from the GPU brand with cards lower down the ladder, primarily with its non-enthusiast-tier cards. In any case, the card model that we’ve been provided with is, as indicated, from Gigabyte’s Gaming OC lineup.

Now, I actually expected the RTX 4070 Ti to be as big as the RTX 4080 and 4090, but surprisingly, this card actually isn’t as gargantuan. Before you get the wrong idea, the card is still huge; the card barely fits inside a mid-tower casing, but it’s longer than it is thick and chonky. If anything, it is about the length and size of the RTX 3090 FE. That’s still a heavyset card but again, it is nothing compared to the Ada Lovelace generation of GPUs.

In the case of this Gaming OC RTX 4070 Ti, what you get is a pretty straightforward and, dare I say it, very plain aesthetic. You get what I am going to refer to as a “standard” amount of metal for the cooler shroud sitting on top of a heatsink that extends beyond the length of the PCB. On its spine, there’s a switch that you can flip between its BIOS OC and Silent Mode for the card, which is basically the Gigabyte’s way of providing customers with an easy overclocking option. I’ve said this before: the physical feature is a boon, especially for those not well-versed in the ancient art of using the overclocking tool for GPUs like MSI Afterburner or EVGA X1.

One thing I will say about this RTX 4070 Ti is that it is the most visually punctual and temperature-accurate graphics card that I have tested, to date. When idle or being used for light load tasks and activities, the card’s zero RPM technology instantly kicks in, stopping the fans dead. The very minute I fire up a benchmark or game, the fans immediately begin spinning and the integrated RGB rings on each fan also start their light show.

The RTX 4070 Ti is also the first Ada Lovelace GPU that only requires two 8-Pin PCIe connectors, making it the most power-efficient GPU in the RTX 40 Series lineup to date. For that matter, it also draws considerably less power than not just the RTX 4090 and 4080, but also the RTX 3090 as well at 285W. Ports-wise, the card comes with the standard fare of three DisplayPort 1.4 ports and one HDMI 2.1 port.

So, the testbench I am using to test the RTX 4070 Ti retains the same specifications as it has for the past several cards that I have tested since I received the components back in September last year. This includes the same AMD Ryzen 9 7950X, 32GB DDR5-6000 G.Skill Trident Z5 Neo RAM, and ASUS ROG Crosshair X670E Hero motherboard.

For comparison’s sake, I am pitting the RTX 4070 Ti against the RTX 4080 and, to add a little variety, the Radeon RX 7900 XTX. I know, the card is technically suppose to be on par with the RTX 3090 but truth be told, I didn’t have the time to retest that GPU with the latest drivers but I’ll get to that when I can.

At the risk of sounding like a broken record, NVIDIA wasn’t kidding when it said that Ada Lovelace is a game-changer and that the RTX 4070 Ti has a greater performance-per-watt versus the RTX 3090. While it is clearly coming in at a steady third place behind the RTX 4080 and 7900 XTX, a quick comparison between it and the Ampere-based flagship shows it overtaking the latter In the synthetic benchmark.

Where gaming is concern, the RTX 4070 Ti is an absolute beast when it comes to 1440p gaming. In each and every title in my real-world benchmark list, the card’s average framerate never dipped below 80 fps, let alone the 60 fps mark. Across the board, the card is able to deliver triple-digit performance, the only exception to the rule being Cyberpunk 2077 running in the DLSS 2.0 configuration. As for gaming at Full HD, I don’t think much has to be said this resolution.

That isn’t to say that the RTX 4070 Ti performs terribly at 4K. On the contrary, it is more than capable of holding its own at the resolution. That being said, I should point out that during my testing of this card, the frame count does dip below 60 fps at times, with Control being one of the main culprits. Honestly though, that title isn’t surprising, seeing how its one of the few titles that, despite already nearly five years old, still manages to make modern GPUs cry, especially when you try to run the game with RTX turned on and DLSS turned off.

From 3DMark to Unigine’s Superposition benchmarks, I should remind you that the RTX 4070 Ti is not only outpacing its Ampere predecessor, but it is also doing it by consuming considerably less power. Interestingly, it also produces less heat than the RTX 4080 and 7900 XTX, with a peak load performance of 61.6°C. Having said that, external factors contributing to this state could be the ambient temperature of my lab, which is also kept between a nice 19°C and 20°C, but at the same time, it is likely that the Gigabyte’s cooling solution is also proving to be especially efficient at dissipating the heat generated from the GPU.

One major question pops up in my head with NVIDIA’s GeForce RTX 4070 Ti over and over though, and it stems from its pricing. At a starting SRP of US$799 and with near-world-class performance at 1440p resolutions, it feels as if NVIDIA has shot itself in the foot by releasing such a significantly cheaper card than the RTX 4080, which already isn’t selling as well as the RTX 4090, and also due to their price-to-performance ratios, its power notwithstanding.

But be that as it may, it cannot be said that the RTX 4070 Ti is anything but a solid performer. Remember, we’re technically getting better than RTX 3090 performance and at more or less the same MSRP of the RTX 3080 when the card first came on to the scene more than two years ago prior. For that matter, it’s also cheaper than AMD’s current Radeon RX 7900 Series cards, which also means Team Red will need to up its game with lower-tier RDNA3 graphics cards, whenever they may launch.

The post Gigabyte GeForce RTX 4070 Ti Gaming OC Review: Gaming At 1440p, And Then Some appeared first on Lowyat.NET.