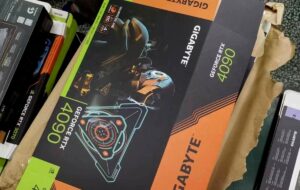 Not long after images of Zotac’s custom-cooled GeForce RTX 4090 leaked, giving us a glimpse of things to come, the proverbial floodgates were opened, paving the way for more leaked images of cards from other brands. This time round, the brand is Gigabyte and more specifically, its Gaming OC model.

Unlike the Zotac AMP EXTREME Airo RTX 4090 card that was leaked, the images this round only seem to show the packaging for the Gigabyte branded NVIDIA flagship. However, despite the lack of an actual card, the box does still contain the usual branding and features that are usually plastered across it.

For starters, and as with all of Gigabyte cards under the Gaming OC line, this RTX 4090 is very obviously going to be a real chonker, both in length and girth. In addition, the card will be sporting the usual triple-fan cooling configuration, attached on top of the undoubtedly massive heatsink just above the GPU and PCB. To that end, it wouldn’t be an overstatement that this would take up at least three slots on in a system, bare minimum.

Moving on, the Gigabyte packaging also confirms some of the finer details that have been hanging in the air about the RTX 4090; the information at the left edge of the box’s front confirms that the card will indeed ship out with a 24GB GDDR6X graphics memory configuration. More importantly, the ears of the box also affirms NVIDIA’s decision and choice of the new font, which is to be used across the board for the entire GeForce RTX 40 series moving forward.

The NVIDIA GeForce RTX 4090 is expected to be announced during the GPU brand’s GeForce Beyond virtual event, which is happening on 20 September. Other specifications of the card include an AD102 GPU that is based on the new Ada Lovelace architecture and 16384 CUDA Cores straight out of the box, and potentially next-generation Tensor and ray-tracing (RT) cores, as well as 450W TDP.