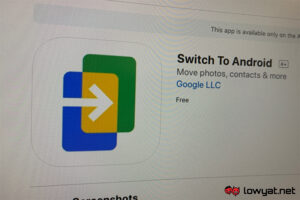 While Google is a bit late to the game, it has quietly launched its official Switch To Android migration app to make it easier to switch from iOS to Android. Rumours of the app came out last year, serving as Google’s version of Apple’s long-existing Move to iOS app.

Switch To Android transfers your contacts, calendar events, as well as your photos and videos from iCloud to Google Drive and Google Photos. Just like with Apple’s app, the migration is done wirelessly using a Wi-Fi connection, so no cable is needed.

Users just need to scan a QR code on their Android phone during the setup and restore process using their iPhone, although Android Authority notes that this doesn’t seem to work yet. The app will also remind you to turn off iMessage on your iOS device to ensure that you only receive SMS messages during the process.

Oddly enough, Switch To Android seems to be unlisted on the App Store for now and can only be accessed through a direct link. While the app is a long time coming, migration between the two platforms is still not completely seamless when you factor in the popular messaging app WhatsApp, which does support iOS to Android transfers for certain phones but as of now, there’s no official way to migrate data the other way around.