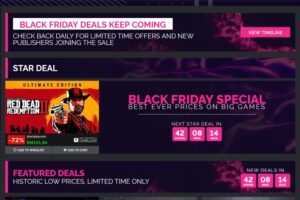 If you keep up with upcoming sale periods, you’ll know that Black Friday is coming next week. But the year end holiday sales don’t always have to start late, as UK-based PC video games retailer Green Man Gaming has already kicked off its Black Friday sales. And assuming you’re not looking only for new games released this year, there are some serious discounts to be had.

When it comes to sales like this, the usual heavy hitters return as common contenders. This includes the likes of Red Dead Redemption II and its 70% discount, or the Borderlands spinoff Tiny Tina’s Wonderlands listed at slightly less than half its usual asking price. With some of these, like the aforementioned RDR2, you’ll have to be a little bit more careful since Steam is not listed as an available platform. Instead, this discount only applies to copies of the game from the Epic Games Store or Rockstar launcher.

Going off the beaten path, but not quite into indie territory, a good pick this time around is the Darksiders Blades & Whip Franchise Pack. This consists of the three main entries into the series, namely Darksiders Warmastered Edition, Darksiders II: Deathinitive Edition and Darksiders III Digital Deluxe Edition. And you can get this for 75% off its normal price, or RM38.75.

Another personal recommendation is the entire Sniper Elite series. Minus the latest entry or the VR title, every other title in the series has at least 70% of its price being cut. These games are already cheaper than most games on average on release day, but with these discounts, you can get one for about RM20.

Green Man Gaming also has what it calls star deals, which will further lower prices for select titles. These rotate every 48 hours, incentivising visitors to return. Another incentive to get people to check back is the fact that publishers joining in on giving discounts are staggered. You can check out all the discounts on offer, as well as the schedule for publisher discounts, by hitting the links below.