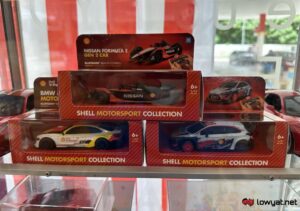 Shell Malaysia has recently rolled out the new Shell Motorsport Bluetooth Remote Control Collection to its petrol stations across the country. As per our previous report, the energy company would release a new model each week with the exception of one particular model.

The first model which is the BMW M4 Motorsport made its way to Shell petrol stations on 8 October and is scheduled to be on the shelf until 14 October. The full release schedule has since been displayed at the stations as well as on Shell Malaysia’s website but in case you have yet to check them out, here it is:

As mentioned earlier, only one car that is not on the weekly release schedule which is the Ferrari SF90. To obtain the F1 model, you have to purchase a selected Shell Helix 4L lubricant although the car as well as a Bluetooth Smart Battery module will be provided at no extra charge.

For other vehicles, they carry a price tag of RM30 each and this also applies to the Bluetooth Smart Battery module too. However, you have to pump at least RM50 worth of fuel before you can purchase them.

If you are planning to collect all seven of them, you may want to consider the Limited Edition Collector’s Case too which features pre-cut protective foams that followed the shapes of each vehicle within the collection as well as two Bluetooth Smart Battery modules and their charging cables. The case is priced at RM80 but before you can get your hands on it, you also need to pump in at least RM80 worth of Shell V-Power Racing for your own vehicle.

In case you missed our previous report, what made Shell Malaysia’s new automobile collectibles more special than previous releases is the fact that they can be controlled via Shell Racing mobile app. In other words, they are not made just for static display.

The Shell Racing app itself is not a one-trick pony since it is actually a full-fledged mobile racing game. Available for both Android and iOS devices, you can play the game without even the need to obtain any of the cars within the Shell Motorsport Bluetooth Remote Control Collection.

All of the photos within this article were captured at the Shell Subang station, Federal Highway.