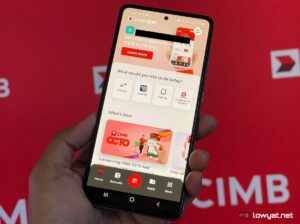 Two years after the last major redesign of its Clicks mobile app, CIMB has released yet another mobile app called the CIMB OCTO App. As you may notice, the app is named after the bank’s mascot.

First and foremost, this does not mean the end of the CIMB Clicks app though. The bank assures that the existing mobile app will continue to be available to users as the OCTO App is still in its infancy.

In fact, the bank will still deliver SecureTAC to the old app. Not only that, you still have to use the CIMB Clicks app to approve web transactions.

Now that we got that out of the way, so what’s new about the OCTO App? Based on our brief experience with the app as well as information provided on its official website, there seemed to be at least two major focuses: user interface and customisation.

The bank claimed that revamped UI is meant to deliver a faster and simplified user experience. For example, OCTO App allows users to initiate DuitNow QR transactions directly from its navigation bar on the home screen.

CIMB has also set the default limit for quick payment at RM500 as opposed to the common limit of RM250. Of course, the transaction must be approved by biometric authentication or passcode.

For credit card users, they can check their CVV security code directly on the app instead of taking their card out of their wallet to check it out. While it sounds fairly useful for those who frequently make their purchase through their smartphones but this particular implementation may sound like a security risk for some.

Another big change that the OCTO App has brought to the table is the ability for users to set their own favourite shortcuts on its home screen. This is something that can’t be done on the existing Clicks app.

In addition to that, users can now check their account balance directly on the home screen for up to three accounts. Those who prefer not to have the actual amount shown on the screen, they can choose to mask it as well.

With the introduction of the app today, CIMB intends to gain feedback from users and use them to continuously refine its features as well as user experience. That being said, CIMB is planning to roll out the full-fledged version of the OCTO App within the first half of 2023 and while OCTO only exists in the mobile app form at the moment, the bank is already actively working to have it on web too.

According to Kanags Surendran, the Regional Head of Digital Banking, Payments & Personalisation, noted that the web version of OCTO will likely be available by late next year. In general, CIMB is focusing more on the mobile app first given the huge amount of transactions that it handles and the web will generally come after the OCTO App as it is more established and matured in terms of features and services.

We are currently going through the official presentation by CIMB, so come back for more up-to-date information. That being said, the OCTO App is already live on Apple App Store, Google Play, and Huawei AppGallery, so CIMB customers out there are already able to experience the app immediately.

The post Here Is Your First Look At The New CIMB OCTO App: Available For Download Now appeared first on Lowyat.NET.