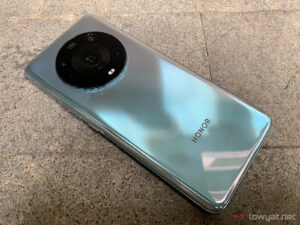 HONOR recently launched its first flagship in Malaysia, the HONOR Magic4 Pro. As with the other shiny new flagships in the market, it is equipped with all the bleeding edge bells and whistles that you could ask for. This means that the real differentiation in this class is the user experience, which was a mixed bag for me during my couple of weeks with it.

For our market, the phone comes in only one variation, and that’s with 8GB RAM and 256GB of storage, and it’s priced at RM3999. So far, the company has not announced any plans to bring the base variant to Malaysia, so I am not able to compare if the Pro model is worth the higher price tag.

The HONOR Magic4 Pro certainly has a premium feel with glass wrapping the whole body, but this comes with a major downside of it being a fingerprint magnet, especially with the back’s extremely shiny finish. The moment I pick up the phone, it’s a guarantee that the rear will be full of highly-visible smudges, making it an embarrassing mess every time you leave the phone face-down for others to see. To that end, I’d highly recommend a phone casing to hide those sinful smudges.

A big screen phone that is surprisingly wieldy.

Moving on, I am not a big fan of curved displays but the dual-curve on both the back and front makes this giant phone much easier to handle with even one hand and surprisingly, As such, I have not experienced any unwanted or accidental touches on the edges. HONOR made the smart decision of putting the pill-shaped camera cutout on the top-left corner instead of in the middle, making it much less distracting.

The camera bump is undoubtedly the biggest attraction of the phone, which HONOR calls the “Eye of Muse”. It takes up almost half of the back and looks almost like a full-on digital camera, reminiscent of the Nokia 808 Pureview from the days of yore.

At first glance, it looks like a five-camera setup but it actually only has three camera sensors, the other two being a Time-of-Flight (ToF) sensor and a flicker sensor. Since the camera island is positioned in the centre instead of being on one side, the phone is relatively stable when using it on a flat surface with minimal wobble.

Moving on, the volume rocker and home button are still on the right side but for some reason, these ones are satisfyingly clicky. The SIM card tray, USB-C charging port, and speaker grille can be found at the bottom while the top houses another speaker and an IR blaster.

For security, the phone has an ultrasonic under-display fingerprint sensor in the middle of the display and I feel that it is positioned perfectly for my thumbs, given how small my hands are. It is also rated at IP68 for dust and water resistance, so you can use the phone outdoors with peace of mind during the rainy season.

Coming in with high expectations, the HONOR Magic4 Pro’s AMOLED display does not disappoint. Everything on the screen is sharp, vivid, and incredibly smooth thanks to the 120Hz refresh rate that can also go down to 1Hz when there is static content to save on battery.

Qualcomm’s 3D Sonic Sensor makes unlocking the phone incredibly fast, even with sweaty fingers and has so far not failed even once. The front-camera setup also has a depth sensor for face unlocking, which works well even in bad lighting and is almost on par with Apple’s Face ID.

The stereo speakers sound great even when it is cranked up to full volume and even calls sound great on the phone’s earpiece speaker. Alas, as with most flagships these days, you won’t find a 3.5mm headphone jack anywhere.

Equipped with Qualcomm’s Snapdragon 8 Gen 1, the Magic4 Pro’s prowess is comparable to its rivals running on the same chip. Another surprise? The phone did not get uncomfortably hot or feel like I was handling a hot potato fresh out of the oven, even after going through multiple heavy synthetic loads; a sign of what I believe to be a very impressive cooling system.

The phone’s battery life is respectable, comfortably lasting me an entire day or two depending on my usage. That being said, I never felt the need to worry about running out of juice as the 100W charging can boost the battery percentage by double digits in just a few minutes. When put through my usual YouTube video loop test at 25% brightness and volume, it lasts about 12 hours.

Adding on to that, the Magic4 Pro conveniently supports the super-fast 100W charging speed, both on the wired and wireless circuits, though oddly enough, the charging brick that comes in the box is actually capable of 135W charging. For that matter, if you try to use the wireless charging stand with a fast charger from another brand, it limits the charging speed to 50W. Sidebar: the 5W reverse wireless is also a useful tool to charge my AirPods whenever I need a quick top-up.

The hardware of the phone is all good, but the software side is where the phone’s issues lie. Running on Magic UI 6.0 based on Android 12, the interface makes this blazingly fast phone feel sluggish. Most of it actually has to do with HONOR’s intentional animation decisions, putting form over function.

Whether it was unlocking the phone, bringing down the search bar, or switching camera modes in the Camera app, a lot of the animations and transitions make the phone feel slower than it is. It certainly is not a deal-breaker and you can do some tweaking to turn off certain animations, but having to do digging around to make the phone feel more usable felt counterintuitive to the user experience.

As mentioned before, the back of the phone sports three cameras and two extra sensors. They are made up of a 50MP main camera, a 50MP ultrawide, and a 64MP periscope lens capable of 3.5x optical zoom and 100x digital zoom. While I found that each lens was good on its own, the ultrawide had a tendency to be noticeably darker than the main camera.

Thanks to the large sensor on the periscope, the phone is capable of capturing photos zoomed in at 20x or sometimes even 30x without much noise, though as with other phones with the same claims, the 100x digital zoom is barely usable, albeit a fun gimmick to spy from afar.

The phone’s image processing is a bit unpredictable, especially for night-time photos. There were times when I captured a photo in the dark and it appeared vibrant in the viewfinder, but then ended up being darker than expected with the finished, processed image.

In the daytime, photos appear sharp and crisp, but also appear to be a bit overblown on occasion. The selfie camera is especially prone to appearing overly brightened, while faces appear to be slightly smoothened even with the beauty filter turned off, which may or may not appear tacky depending on your preference.

At the RM3999 and with the specifications being offered with the phone, and given its launch proximity with other flagship smartphones at the time, it goes without saying that the Magic4 Pro has some competition in the field. Below are just a few to mention.

OPPO’s latest flagship also features the Snapdragon 8 Gen 1 with similar specs such as a 120Hz LTPO AMOLED display. Costing an extra RM1000 over the HONOR Magic4 Pro, the Find X5 Pro also has a three-camera array with a 50MP wide and ultrawide, but with a much lower-resolution 13MP telephoto lens and a bigger 32MP selfie sensor without the 3D facial recognition.

It comes also with 12GB RAM for heavy multi-taskers and its stereo speakers have Dolby Atmos support, though it comes with the same amount of storage. While its wired and wireless charging speeds are both significantly slower than the HONOR phone, it does come with a bigger 5000 mAh battery.

The Xiaomi 12 Pro similarly runs on the Snapdragon 8 Gen 1 with a 120Hz LTPO AMOLED panel with a single 12GB RAM and 256GB storage configuration. It is equipped with three 50MP sensors comprising a wide-angle lens, an ultrawide, and a telephoto camera with a 32MP sensor at the front.

It is powered by the same-sized battery as the HONOR Magic4 Pro but with faster 120W wired charging and much slower 50W wireless charging. It is priced at RM3899, so for the slightly lower price, you can get similar specs but with, in my personal opinion, a much cleaner Android experience.

The realme GT2 Pro is another Snapdragon 8 Gen 1 flagship that comes with a significantly more affordable price tag of RM2999. It sports a 50MP primary camera, a 50MP ultrawide, and a 3MP microscope camera with 40x magnification while the front house houses a 32MP sensor.

The phone also has a 120Hz LTPO AMOLED display with 12GB RAM and 256GB internal storage. It comes with a bigger 5000 mAh battery but unfortunately, one of the biggest compromises made for the phone is that it only has 65W wired charging and no wireless charging.

The HONOR Magic4 Pro brings a lot to the table with great value for its top-notch features. While Magic UI can be a bit of an eye sore and requires a lot of tweaking on the user’s side, it is a compromise that I’m willing to make if it means getting the superfast biometric security options and the ultra-sharp cameras at a price point that is not completely unreasonable.

While the 100W wireless charger costs an additional RM299, I can’t see myself going back to using other wireless chargers that now feel unbearably slow, by comparison. It is a phone that I would recommend with heavy caveats, but with a thumbs up nonetheless.