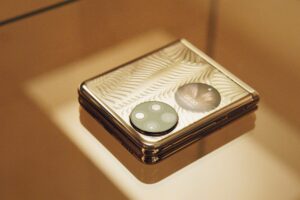 Huawei has made a few foldable devices of its own, but they have all been of the same form factor, in that they all fold from side to side like a book. But the company has been teasing a clamshell foldable that’s more akin to the Samsung Galaxy Z Flip series. It’s called the Huawei P50 Pocket, and it has been revealed in a photo shoot for Harper’s Bazaar China, of all places.

At a glance, it does look like a version of the standard Huawei P50 that you can fold like a clamshell. But while the standard version has two camera islands, the P50 Pocket has one camera island and a circular external display. Being small, said display probably wouldn’t be able to show you much beyond the date, time, and some notifications. But photos from the shoot implies that it can be used to see if you’re taking selfies properly.

One other notable difference between the two devices looks to be the presence of a side mounted fingerprint sensor on the Huawei P50 Pocket. It sits on the top half, alongside the cameras and the external screen.

Nothing much is known about the Huawei P50 Pocket, speculations aside. Though the company has plans to officially launch the device on 23 December.